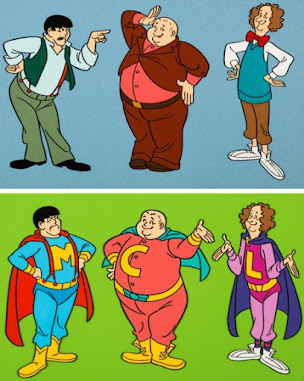 American Mythology's The Robonic Stooges recreates the classic Saturday Morning cartoon from the late 1970s, created and developed by comic book talent, latter day Stooges manager/agent/producer, and Moe Howard's son-in-law Norman Maurer, for Hanna-Barbara Productions.  The cartoon was a classic for the kids of the late 1970s, where the Stooges mix with superheroes, robots and bionics... hence the "robonic".  With the real Stooges deceased, the voice actors that were chosen were perfectly cast.  Paul Winchell, who starred in the Stooges clip feature film, Stop Look and Laugh, is excellent as Moe, Joe Baker does a fine Larry, and Frank Welker, who had been doing a Curly imitation for the title character of the Jaws inspired cartoon Jabberjaw, is pitch perfect as Curly.

As for this comic book, the first story by S.A. Check and Phillip Murphy takes a subtle jab at the Marvel Cinematic Universe, with artwork that is very faithful to Maurer's original character designs.  The second story by Jordan Gershowitz and Jorge Pacheco has more of a vintage Mad Magazine flavor in both story and artwork. The issue concludes with some special feature articles of the history of the Robonic Stooges and interviews with this issue's creative teams.  Another good and fun outing from American Mythology, and even though they usually only do one-shot specials with the Stooges, I wouldn't mind seeing an actual issue #2 of The Robonic Stooges.

Posted by Shazamaholic at 3:13 PM