As we celebrate Elvis' birthday, I thought I'd take this opportunity to put a spotlight on Elvis' best overlooked and under appreciated recordings, similar to my previous Monkees post.

Many of the songs on this list will be from Elvis' movies, often dismissed, yet the source for some real gems.﻿ 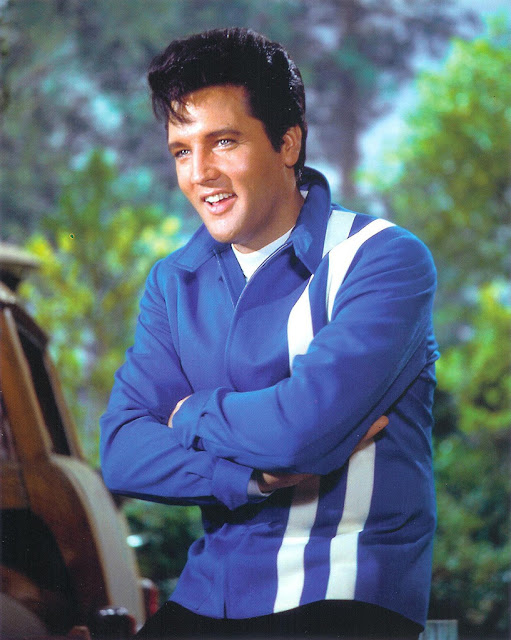 Baby Let's Play House is one of Elvis' earliest tracks from the Sun Records era, and if ever there was a very definition of "Rock and Roll", it would be this song.

My Baby's Gone is a slow blues tune recorded at Sun that Sam Phillips felt was a little too bluesy, so it was never released. It was remade as an up tempo Rockabilly number under the alternate title I'm Left, You're Right, She's Gone.  But it's the original blues version that's the winner.

Mean Woman Blues is a highlight from the movie Loving You and became a Rock and Roll standard covered by many other artists, but it's Elvis' original that set the standard.
Tell Me Why is a blues ballad that showcases Elvis' vocal range in his early years.

A Fool Such As I  is a great example of how Elvis could take a slow, Country song (originally recorded by Hank Snow) and turn it into a breezy, swinging rocker.

Fame And Fortune is a great do-wop ballad with Elvis in great form.  It was the b-side of his first single after getting out of the army, and first true stereo release.

Like A Baby is one of Elvis' best tracks off one of his best albums, Elvis Is Back! (1960). A blues number that fits Elvis' pleading vocal performance perfectly and is proof that he was one of the best blues singer of all time.

Summer Kisses Winter Tears is a nice Western ballad that was cut from the movie Flaming Star but went on to be released as a single.

That's Someone You Never Forget is a hauntingly beautiful ballad.  It is one of a very few songs Elvis co-wrote when he tried songwriting in the early 1960s with his Memphis Mafioso Red West (tracks from the 1950s that gave Elvis songwriting credit were due to his song arrangements and occasional lyric revisions, the main exception being the four Love Me Tender soundtrack songs, which were essentially a form of "payola"). It's too bad Elvis didn't have the interest to continue with songwriting, as this track proves, in time, he could have been a major songwriting talent.

She's Not You﻿ is the result of Jerry Leiber and Mike Stoller teaming up with Doc Pomus, to form a songwriting supergroup.  While not the hard rocking track one would expect from such a collaboration, it is never-the-less, a nice mid-tempo pop tune.

What A Wonderful Life is a swinging, bouncy number from the movie Follow That Dream and in a way, perfectly captures the essence of the "Elvis Presley movie franchise".

King of The Whole Wide World is a bouncy rocker from Kid Galahad.

A Mess of Blues is just what the title says, and has since become something of a blues standard.

Long Lonely Highway is song that urges one to go on even though things aren't very good. Very good track that was later incorporated (with horn overdubs) into the movie Tickle Me.

Kiss Me Quick is a cute and fun pop track that shows how musically versatile Elvis could be.

C'mon Everybody is a fantastic rocker from the movie "Viva Las Vegas", not to be confused with the Eddie Cochran song with the same title. The official released version was mono, but seeking out the alternate stereo mix is worth the effort, as it really rocks.

The Meanest Girl In Town is a rocker from the movie Girl Happy that was so good, Bill Haley and His Comets recorded it days after Elvis under the alternate title Yeah She's Evil, and rushed its release before Elvis' version with the hopes of reviving the Comets' career.
﻿
Spinout is a bluesy, up tempo soul number, kind of a counterpoint to the soul classic Expressway To Your Heart. With its driving bass line, and some killer Hammond organ riffs this is an overlooked gem that would fit in perfectly at dream cruises and classic car shows.  Elvis must have liked the song, too, since when he performs it in the movie of the same name, he breaks into some of his old 1950s dance moves, something he only did in the 1960s when he was really having fun.

Hard Luck from the movie Frankie & Johnny is a great blues tune with some wailing harmonica playing by Charlie McCoy.

Hey Little Girl is a fun and cute rocker from Harum Scarum that really should have been a major hit.

Long Legged Girl (With The Short Dress On) is a short but fun rocker from the movie Double Trouble. With the Jordanaires' old-school doo-wop backing vocals, and Elvis singing great lyrics like "walk in stilts in ten foot leaps" looking for the elusive title character, it is impossible not to like this song.

Too Much Monkey Business is a cover of the Chuck Berry classic Elvis recorded with Jerry Reed providing the guitar work.  Recorded at the same session that included Guitar Man, Big Boss Man, Hi-Heel Sneakers, U.S. Male (arguably an early precursor of rap), and Stay Away Joe, each of these songs are gems and reignited Elvis' creativity after years of soundtrack albums, and was the first step of his "Comeback".  An interesting footnote:  in the 1960s, Elvis was always lambasted by critics for being "out of touch" with the world around him, living in his own protected bubble.  Yet, in this song, Elvis alters Berry's original lyric to include a reference to the Vietnam war.  Maybe Elvis wasn't as out of touch as everyone was led to believe.

Let Yourself Go from the movie Speedway is such a great song that Elvis remade it for his 1968 Comeback special.

All I Needed Was The Rain is a down on your luck blues tune from Stay Away Joe with some great harmonica and resonator guitar.

Wearin' That Loved On Look is a Soul-Rhythm & Blues track from another of Elvis' best albums, From Elvis In Memphis (1969). The entire album is excellent and is, unfortunately, the only all-out Soul/R&B album Elvis ever made.  This song was the first track, and set the pace for the album.

If You Talk In Your Sleep is a funky 1970s track, co-written by Red West, with a "Blues Brothers" style horn arrangement. For most of the 1970s, Elvis' recordings tended to be on the Country-rock side.  So, in the final couple years of his life, when he began to record funky, bluesier numbers like this and Way Down, and treaded into 1950s nostalgia tracks like Pledging My Love and Hurt, it kind of gives you an idea of where Elvis would have gone musically had he lived into the 1980s.

Any one of these songs, if reissued today, would be a number one hit, much like A Little Less Conversation, another lesser known movie soundtrack song, was when it was remixed and reissued in 2002.  I may have to do a "Part 2" to this article sometime.
Posted by Shazamaholic at 9:20 AM

THANK YOOOOOOOU!!! I wanted to have a little Elvis/Memphis soiree tonight and I needed a list of songs that didn't include jailhouse rock and love me tender :) NAILED IT! xoxoxo

Love this list!!! My dog grooves to this list whilst am doing boring housework, she strutts around the kitchen whilst Elvis is rocking it. She loves the funky Elvis!! #KikiBigPaws

Brocktoon, you can find part 2 at shazamaholic.blogspot.com/2018/11/the-best-elvis-songs-youve-never-heard.html