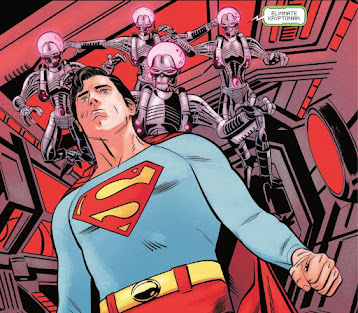 This issue picks up with the excision of Metropolis by Brainiac.  In the bottle city of Kandor, Jor-El re-attunes Luthor's device so that Superman can return to his normal size.  Superman says good bye to his parents as Brainiac begins the miniaturization of Metropolis. (On page 6, could that be a cameo of Richard Pryor's Gus Gorman from Superman III?) Luthor takes off in a balloon, and Superman returns to stop Brainiac's machine.  The rest of the issue is a fight scene between Superman and Brainiac and his robots, ending on a cliffhanger.

What can I say that I haven't already said in my reviews of the previous issues.  This creative team gets it, and excels.  This issue earns another A.  Looks like it'll be a sweep of A's for this mini-series.  We'll find out with the final issue next time.
Posted by Shazamaholic at 10:09 AM