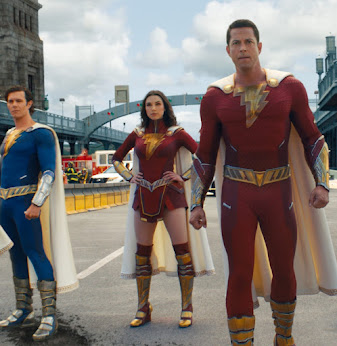 Warner Brothers/New Line Cinema have released the first official trailer for Shazam Fury of the Gods and a new teaser for Black Adam. As with the previous Black Adam trailer, this one seems very basic and superhero generic. The Shazam 2 trailer gives us more of what made the first movie unbearable. More "New 52", more of the World's Mightiest Mortal acting like the World's Most Obnoxious Brat, and more campy, lowest common denominator "comedy". Having an Eminem song polluting the whole thing does it no favors either. Neither of these trailers have changed my mind. I won't waste my money to go see either of these movies in the theater. I'll either wait until they air on TV... or I may not bother seeing them at all. I hope there is a Captain Marvel reboot soon, and maybe Baz Luhrmann should direct it.  He showed far more respect and reverence to the source material in Elvis than either of these missteps.

Posted by Shazamaholic at 4:51 PM