Review: The Three Stooges: Thru the Ages #1 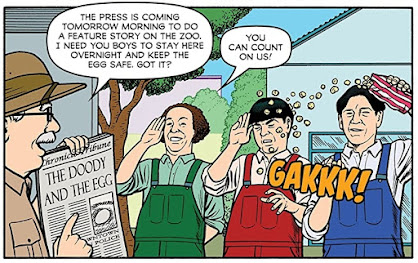 American Mythology's latest one-shot of the Three Stooges, subtitled Through the Ages, presents three different line ups of the boys.  The first story, by the regular team of SA Check and Brendon and Brian Fraim, feature Moe, Larry and Shemp causing chaos as Zoo workers. The creative team turns in a solid entry, with special note going to the Fraim Brothers stellar artwork.

Next up is a story by Todd Clarke and Diego Tapie that has Moe, Larry and Curly in a sport fighting tale reminiscent of their shorts Punch Drunks and Grips, Grunt, and Groans. Clarke's script is fun, and Tapie's art is cartoon-inspired and top notch.

The third story is by Jordan Gershowitz and Jorge Pacheco, and has Moe, Larry and Curly-Joe DeRita as movie actors in a situation similar to the DeRita era where the boys were making watered down feature films aimed at children.

Unfortunately there was no story featuring Joe Besser, who was superior to the lackluster DeRita, nor was there a story with the comedic genius who essentially created the Stooges, Ted Healy. Perhaps a future one-shot will give some time to Healy and perhaps even Besser (but I wouldn't mind if we don't see DeRita anymore).

The issue concludes with a check list of the past five years of Stooges comics, and a fun interview with Larry's great-grandsons and Curly's grandson. This issue is a good and fun read, and I look forward to the next one.

Posted by Shazamaholic at 12:11 PM