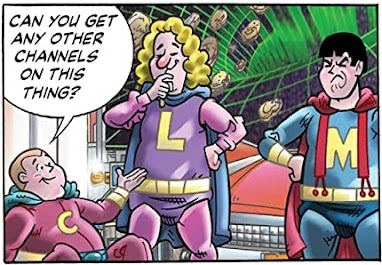 For the first time ever, American Mythology has published an issue #2 of a Three Stooges comic. The Robonic Stooges #2, like the first issue, features two stories and a couple text pieces. The first story, written by S.A. Check, is another story taking inspiration from Marvel Comics.  What, no love for DC?  In a Fantastic Four inspired tale, our heroes encounter a giant mole man who bears a slight resemblance to Shemp.  As with the previous issue, the art by Jorge Pacheco, has a distinctive Mad Magazine/Sergio Aragonés riff.

The second story, written by Todd Livingston, deals with the boys taking a vacation on a Fantasy Island-esque island, and, hold on to your grouses, attempt to make Larry a romantic leading man by giving him a love interest, perhaps inspired by his leading man turn in the boys' first Columbia short Woman Haters.  The art by Diego Tapie mimics the art from the later Dell comics.  After the text pieces and a misplaced "sneak preview" of Three Stooges Thru the Ages, which was published ages ago, there is an announcement there will be an issue #3 later this Fall. It looks like the comic book may last longer than the original cartoon series did.
Posted by Shazamaholic at 2:03 PM