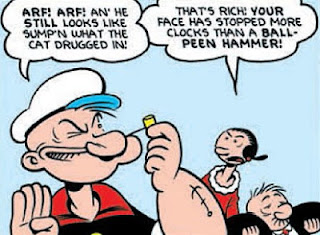 This issue is written and drawn by Roger Langridge.  His art is something of a cross between Bud Sagendorf and Bill Zaboly, if a bit more primitive.  The story is a western-action-mystery that brings back Olive's first boyfriend, Ham Gravy. He's now an ostrich rancher, and developed incredible strength through the Charles Adenoid exercise program.  Ham's ostriches have been disappearing, and they discover the culprit is the Desert Yeti (played by this issue's special guest star, Michelle Obama).  The story's centerpiece is a fistfight between Popeye and Ham. They then team up to take down the Yeti.  The story is amusing with an abundance of dialogue, but as typical of Langridge, no real bust out laughing moments.

This issue has a second story featuring Sappo and Watasnozzle that is likewise amusing and typical of the Sappo-Watasnozzle back up features.  This issue earns a C+.
Posted by Shazamaholic at 12:05 PM No comments:

Chapter 7 of Curse Of Shazam in JUSTICE LEAGUE #14 begins with Sivana and Black Adam atop the Empire State Building, looking down at New York City.  Sivana explains to Black Adam he needs him to bring magic back into the world in order to save Sivana's family. They witness workers striking against their company, which spurs Black Adam to kill their "Pharaoh", setting the "slaves" free.  The workers, instead, flee in terror at the sight of the murder, confusing Adam, who thinks he has saved them. Black Adam takes Sivana to the Rock of Eternity, where the powerful magic begins to have a whithering effect on Sivana's body, since he is not enchanted to channel it.  Black Adam cannot enter the Rock, but sees the Wizard's lifeless body on the ground, so he deduces the Wizard created a new champion.  Cut back to Freddy and Capt... er, Shazam.  Freddy buys a $10 trench coat at a second hand store to cover Capt... er, Shazam's costume, only to have him look like Jethro Bodine, with the coat too small.  Cut back to Black Adam and Sivana, who recruit Sloth, who has been imprisoned in human form, to take down the new champion, reclaim the Rock, and rebuild Earth.

This chapter is an improvement over the disappointing origin sequence.  However, for Freddy and Cap...er, Shazam's only brief scene, its still goofy dufus time.  As speculated, it looks like magic will be the cause of big, strong Sivana transforming into the short troll like character we all know.  Black Adam's murder of the business owner, and Adam's belief that he was saving the workers and setting them free was the highlight of this chapter.  It just a shame Johns can only seem to portray Cap... er, Shazam in such a goofy man-child way.  This chapter earns a C+.
Posted by Shazamaholic at 3:22 PM 2 comments:

On November 20, WB Archive will release The Vitaphone Comedy Collection Vol 1 which features all the Vitaphone two-reelers with Shemp Howard as a supporting player.  As a bonus, also included are the four solo Vitaphone shorts starring Fatty Arbuckle.  Presumably, Volume 2 will collect all of Shemp's starring Vitaphone shorts, and one can only hope for a bonus, it will also include the four surviving MGM shorts starring Ted Healy and the Three Stooges (currently under WB ownership).  If you would like to write or email WB Archive to thank them for releasing the Shemp shorts, or to encourage them to include the four MGM Healy and Stooges shorts on Volume 2,  the contact info is