Batman v Superman: Dawn of Justice is all at once grand and epic, yet a little bloated.  The latest Batman movie... and yes, this is definitely a Batman movie with ties to Man of Steel, and not a Superman movie that features Batman... has director Zach Snyder succeeding in bringing, perhaps the closest thing this generation will ever see to a live action adaptation of Frank Miller's Dark Knight Returns graphic novel. While all Batman movies made by Warner Brothers, since 1989, have had various degrees of inspiration and nods to the legendary graphic novel, this one has a record number of scenes and lines of dialogue directly lifted from the source material.  The film opens up with a flashback to the Wayne murders, inter-cut with the funeral where, young Bruce runs off and falls into the future Batcave (not unlike a similar scene in Batman Forever).  However this time, we see a swarm of bats literally levitating Bruce up out of the cave, setting the tone that this is a more fantasy-based take of Batman, after over 20 years of more or less realism-grounded interpretations (Burton and Nolan more, Schumacher less).   From there, we get the film's major plot line set up: the final fight between Superman and Zod from Man of Steel, from Bruce's point of view, fueling Wayne's rage over the kryptonian, and his perceived legacy to keep the world safe. The plot then splits off into many directions, dealing with the Government's concern over Superman, Lex Luthor's obsession with meta humans, the mysterious Diana Prince's search for a World War I photo.

We get the epic battle between the Dark Knight and the Man of Steel, like so much of Batman's part of this movie, lifted nearly verbatim from the graphic novel.  I was expecting a 10 second cameo by Carrie Kelly, suited up as Robin, to assist in this battle, by igniting one of Batman's kryptonite gas bombs on Superman.  Alas, no such scene.  If I may digress a bit, there is a Robin costume on display in the Batcave, as we've all seen in trailers.  We've also all seen the set photo of Dick Grayson's tomb. We've also heard rumors that Jason Todd is the deceased Robin, and Dick is referenced as Nightwing. The film itself, from what I have seen, gives no clarification who exactly this Robin was. This mystery is still unsettled.  More blatant is Jimmy Olsen introduced and killed off in a single scene, and the voice of the president sounds like Donald Trump. There are cameos of the other future Justice League members, most notably by The Flash, who is trying to give Bruce a message, but realizes he's "too early".   This scene would have had more impact if Grant Guston was playing the Flash.  I know, I know, no cross-continuity between DC TV and movies, but at this point, Grant Guston is The Flash, while Ezra Miller is still an unknown entity. The way the Batman v Superman fight ends, though, is one of the corniest spectacles put on film. Superman mumbles that Lex is going to kill Martha.  Ben Affleck then does a Razzies worthy rant, screaming like a madman, "why did you say Martha?", perhaps the movie's unintentionally funniest moment.  Batman realizes his mom and Superman's mom have the same first name. Suddenly, these guys are best friends. The film winds down with shoehorning Doomsday in, complete with the shocking end result of the comics its based on, with Snyder sneaking in out of left field the story line Warners has been attempting to do since 1995 on the big screen.

Ben Affleck takes on the role of Bruce Wayne and Batman, and frankly does better than I thought he would. He's not as good an actor as Micheal Keaton, who was able to disappear into the role, and he's not as unknown as Christian Bale was, so at times you don't see Bruce Wayne, you see Ben Affleck playing Bruce Wayne.  But he does have the potential to be a really good Batman.  The scene where Batman rescues Martha Kent is perhaps the greatest Batman fight-action scene ever captured on film... and again, much of the action and dialogue is lifted verbatim from a similar scene is the Miller graphic novel, and granted, Affleck probably had little to do with it, Batman being played by stuntmen and CGI for the scene.  His Batman costume is far superior to the motocross inspired outfit Bale wore, and his Batman voice is also far superior to Bale's "frog with throat cancer" voice, although some lines of dialogue sounded as if they were auto tuning Batman's voice, which is not a good thing. The biggest setback in Affleck's performance is how Batman kills so casually without remorse or regret. Jeremy Irons play Alfred, again, much better than I thought he would.  Early photos of him had me thinking he would be more suited as Jim Gordon, but he pulls off the Alfred role better than Michael Cain did.

Jesse Eisenberg's Lex Luther plays more like a Batman villain than a typical Superman villain. He has just enough touches of Jim Carrey's Edward Nygma, fleshed out with a sense of insanity that really pushes him into the Batman column for villains. The jury is still out as to whether this is good or bad.  Gal Gadot as Wonder Woman was another casting concern, but I think she pulled it splendidly considering her character was more of an enigma, with just enough screen time to keep both Bruce and us in the audience intrigued.

The weak point of the film may actually be the returning Superman characters. Henry Cavill is just kind of there as Superman. In Man of Steel  all he seemed to do is scream and cry. In this one, he doesn't even do that. In one scene, as Clark, he shows some passion trying to convince Perry White to let him do an article on Batman, and later in the movie he threatens Luthor when he's told he kidnapped Martha Kent. Otherwise Cavill is kind of like a mannequin.  His wooden acting and reciting of dialogue may be the reason, in contrast, why both Affleck and Gadot shined in their roles more than expected.  One other note regarding the kidnapping of Martha Kent. The fact Luthor knows Clark Kent is Superman is just presented in a matter of fact way with no real shock or amazement that Luthor figured out the secret identity.  Amy Adams fared better as Lois, but again, just seemed off, not to mention that she has no chemistry at all with Cavill. One wonders if it would have been better if she were cast as Rachel Dawes in the Nolan Batman trilogy (as she did the screen tests for it), and someone like Mila Kunis were cast as Lois in the Snyder movies.

As with the Nolan trilogy and Man of Steel, the musical score - or more accurately, instrumental sound effects - is instantly forgettable.  The one exception is the Wonder Woman theme.

The other thing that bogs this movie down is the running time. At two and a half hours, you start to feel that it should have been streamlined by about 30 minutes.  As cool as the desert Batman scene was, and the other Bruce and Clark fantasy scenes were, they weren't needed for the plot, and maybe should have been cut.  Likewise, something that bothered me a bit about this take on Batman, Snyder made him a bit too cold blooded. By Frank Miller's sequel, Dark Knight Strikes Again, Miller had Batman killing people without flinching, and Snyder is taking Bruce down that same path.  Another flaw, in my opinion, is that Snyder took the whole project a little too seriously. There should have been a little more space for fun, for a sense of wonder. But on the whole, Batman v Superman delivered a decent... or at least adequate, superhero epic.

UPDATE: Having viewed the "Ultimate Edition", I found it to be more bloated and plodding than the theatrical cut.  However, I will say there are some scenes in the Ultimate Edition that should have been in the theatrical cut, such as Lois' investigative work on the framing of Superman, and her discovery that the bomb in the wheelchair was encased in lead, and after the bomb explodes, Superman flying the casualties out of the wreckage. I also think there are scenes in the theatrical cut that should have been left on the cutting room floor, such as the entire subplot of Batman branding criminals so they will get killed in jail, all the fantasy dreams (desert Batman, Martha's tomb monster, Clark and ghost dad), and trim all the fight and action scenes so Batman isn't such a cold-blooded serial killer. A two-hour re-edit might be a good movie, but the two versions we have now can't live up to the hype.
Posted by Shazamaholic at 3:38 PM 3 comments: 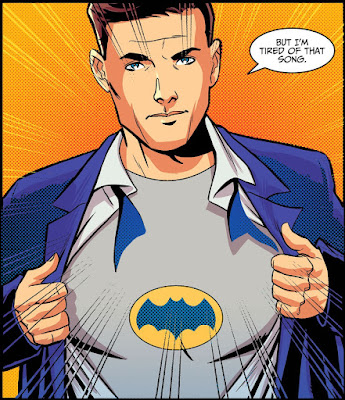 This issue is a step up from last issue, which seemed like filler. The story picks up moments after the conclusion of the last issue where Batman revealed himself as Bruce Wayne. As he explains it, Batman already made plans with Wayne to masquerade as Wayne via a lifelike Bat-synthetic mask, to infiltrate the THRUSH agency. The Terrific Trio and UNCLE agents attend a party by the Royalty of Monaco, to discover the B, C, and D list Bat villains are now part of the cabinet, thanks to The Siren's manipulation of the prince. Wayne allows himself to be captured and the heroes trail him via the British Batmobile, and then a yellow Bat-submarine. At THRUSH's underwater HQ, the heroes invade, Wayne reveals he's really Batman in disguise, and after a fight, they discover the mysterious Corvid  leading this operation is.... I won't spoil it until the next review, but the reveal is a let down.  I thought it would be Penguin.  It's not.  As stated, Jeff Parker's script is an improvement over last issue's filler story, and David Hahn and Pasquale Qualano once again share art duties, each drawing half the issue. This issue brings the grade back up to the consistent B the series has been earning.
Posted by Shazamaholic at 10:23 AM No comments: