After being postponed four months, issue 8 of Shazam! is finally released and could be the final issue of the troubled series. At least it is the last issue to be scheduled for the foreseeable future, and with a rumored "five generation" timeline reboot for DC continuity on the horizon, this whole series may end up being moot. 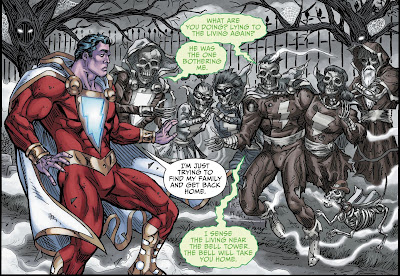 The issue starts in the Wozenderlands (don't ask) with a rabbit (Hoppy?), Eugene, Pedro and Wizard Shazam (who may be an imposter) around a campfire discussing how a seventh member for the Shazam Family needs to be found in order for all to fully realize their powers.  Cut to Billy's father... remember he came looking for Billy a few issues back.... as Mary and the Vasquezes cover for Billy who has, as Captain Shazam, gone to the Darklands.  As Billy's dad leaves, he is trailed by Sivana and Black Adam.  Meanwhile in the Darklands, Captain Shazam encounters a skeleton in a Captain Shazam costume, who explains he is the counterpart who defends the Darklands. Then it's back to Sivana, Mr Mind, and Black Adam trailing Billy's father.  They argue about their plan with Geoff Johns clearly implying Black Adam is really a good guy who gets put in bad situations by other people.  Then it's back to the Darklands where Captain Shazam and Skeleton Shazam are discussing making a deal when the skeletal remains of the "original" Marvel Family emerge from their graves.  They help Captain Shazam escape to rescue Freddy and Darla with Mr Tawny.  They get back to the Vasquez house just as Black Adam attempts to abduct Billy's father.  Captain Shazam arrives to fight Adam, but the 7 Deadly Sins abduct Billy's dad.  As he falls to certain death, Captain Shazam infuses him with power and spells out the name he is supposed to say.  The dad does and transforms into Daddy Shazam, the previously missing seventh member. (Or maybe it's Zazzo-Plus?)

Typical slightly below average script by Geoff Johns (with the advertised return of Captain Marvel utter BS), and generic art by Scott Kolins. Will there be another chapter to this overlong, drawn out story, or does it end here with the upcoming company wide "Five Generation" reboot wiping it all out of continuity?  Does anyone still care at this point?  Stay tuned.  This issue earns a C-.
Posted by Shazamaholic at 7:55 PM No comments: