The first issue of the new, ongoing Shazam! series, written by Geoff Johns with art by Dale Eaglesham starts with a quick recap of the origin. Then it skips to the present, where Billy and Freddy are on a field trip.   First thing I notice is Johns seems to have switched Billy and Freddy's personalities. Freddy is now the one acting like a jerk.  There is a blatant rip off of the Spider Man Homecoming scene where crooks in JLA masks bust in.  Billy changes to... well isn't this interesting... could it be a hint the name may change back to Captain Marvel???  More likely a cruel tease that will never amount to anything.  Suddenly the rest of the family pop in to help what's his name, but he seems annoyed by that.  Afterwards they get into an argument about who's in charge. 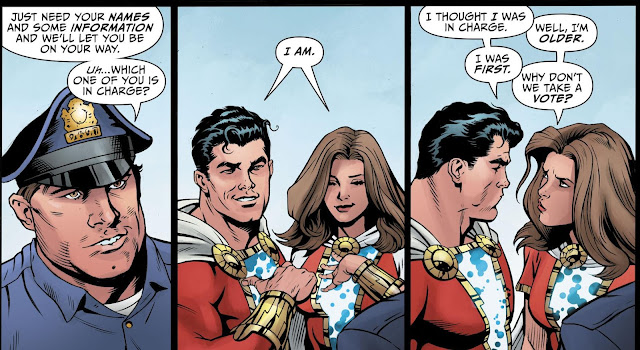 Later at the Vasquez home, with another Captain Marvel tease, they celebrate Billy's one year anniversary with the family. The kids go to the Rock of Eternity, which they have made their base, and they discover the mystery train, and that it leads to the magic lands.  Meanwhile back at the Vasquez's, an unexpected visitor drops in to see Billy.

The script by Geoff Johns isn't as annoying as his Curse of Shazam script was, but it does seem to be on a children's sit-com level.   The art is by Dale Eaglesham and is very good, if a little generic, but my biggest complaint is his Captain Whateverhisnameis has a face identical to Superman, with even the spit curl.

There is a second story, also written by Johns with superb art by Mayo "Sen" Naito that tells how Mary came to the Vasquez family and establishes her real family abused her.

All in all, this issue isn't as bad as I thought it would be, but it is still a far cry the the real "World's Mightiest Mortal". Mayo "Sen" Naito's art earns an A+, and the rest of this issue gets a C+.
Posted by Shazamaholic at 9:00 AM 1 comment: