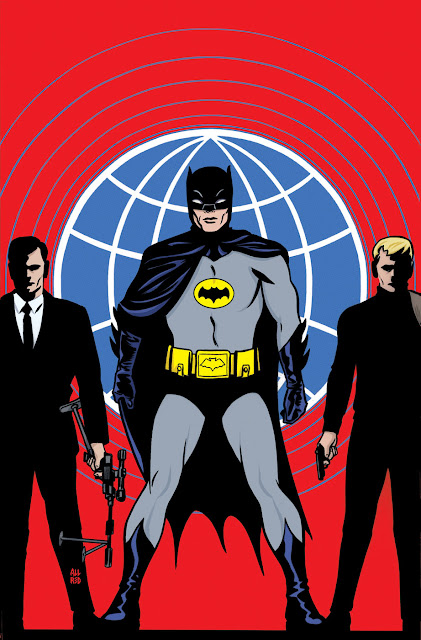 Before I get to this issue, I just have to make a comment about the cover.  It is very striking, and perhaps one of the best covers I have seen from the DC Batman '66 franchise. By regular cover artists Michael and Laura Allred, they based it on David Mazzuchelli's iconic Batman Year One promotional art, and the Man From UNCLE logo.  On to the story itself, written by Jeff Parker with art by David Hahn. It picks up with Batman interrogating the captured Penguin, who turns out to be merely a pawn... or is he?  At UNCLE HQ, where some kind of promotional film is being shot by an Agent Donner (Richard, perhaps?), recreating the first season "long opening", the agents soon discuss the escape of several B and C list villains, and Batman in Gotham City. They produce Bruce Wayne as a possible suspect, and plan to attend a party he's throwing to launch his new aerospace project.  As it turns out, Mr Waverly and Alfred are old colleagues. The Gotham villains, now THRUSH agents, crash the party, and we get our first team up of the UNCLE agents with Batman, Robin, and Batgirl.  I wonder when or if agent April Dancer will join the party?  Parker's script continues the excellent level begun in the previous issue, and Hahn's art is very slick and clean. As for the reason some of the likenesses are less than perfect as I mentioned in my previous review, Mr Hahn himself supplied a comment in my previous post:  "For legal reasons, we could not use the exact likenesses of McCallum and Vaughn, so my take with the art was to get them close, but not exact likenesses."  So, thank you, Mr Hahn for supplying that bit of insider information. It is greatly appreciated. One other thing I want to comment on.  I have been watching  The Man From UNCLE on Me-TV, airing on weekends. Currently they are near the end of the third season, coincidentally as this miniseries is being published. The third season was known for becoming more Batman-like, but the most striking similarity is that Nelson Riddle did the musical score for that season, and many of his cues are similar to to his Batman score.  It is quite something to be watching The Man From UNCLE yet hearing distinctive Batman musical cues.  This issue exceeds the expectations the first issue set, and earns a B+.
Posted by Shazamaholic at 10:32 AM No comments: