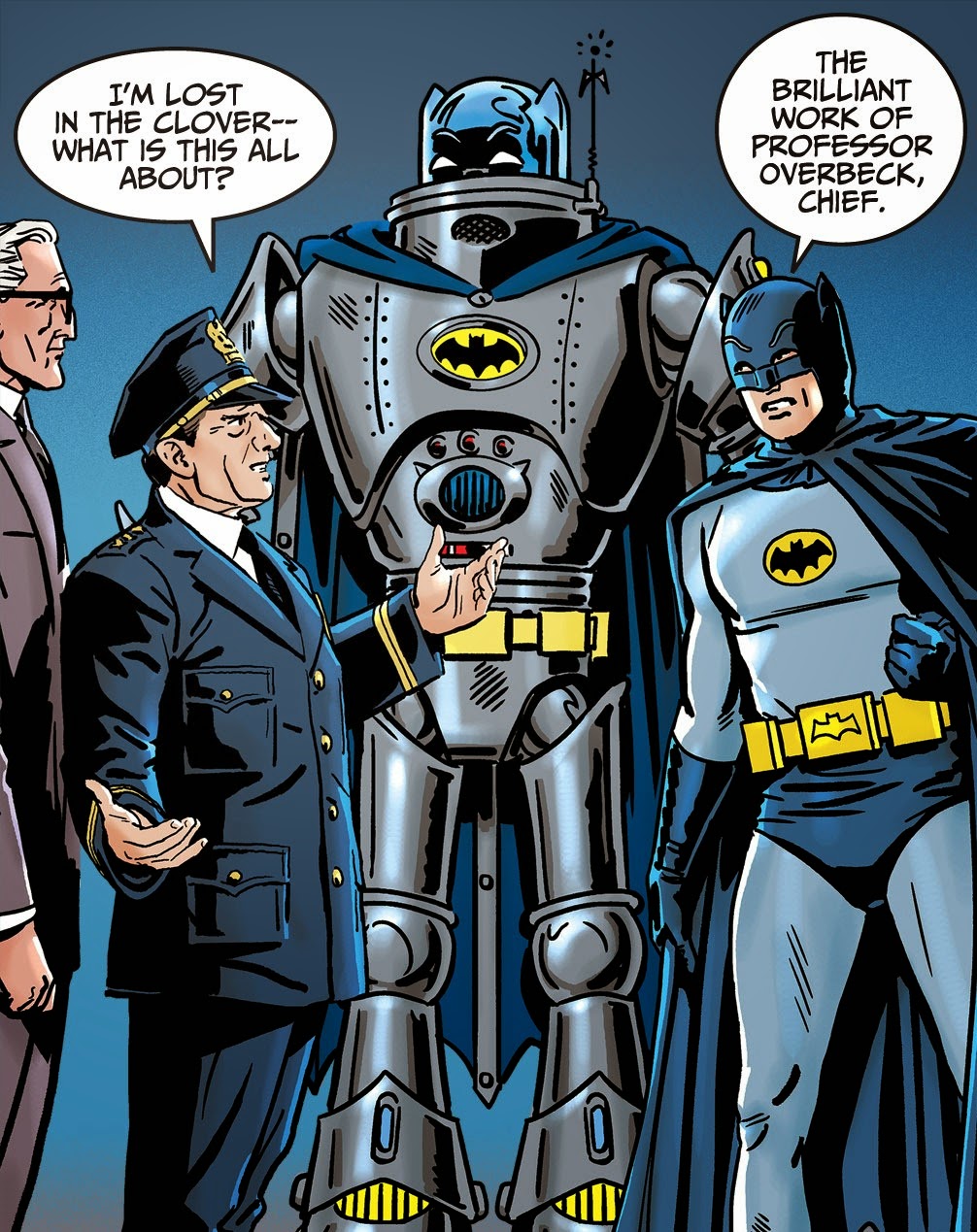 This issue sees the return of Jeff Parker as writer.  Thankfully, he turns in a story that is stronger than some of his other recent efforts.  Professor Overbeck, who is becoming a major character in this series, in conjunction with Batman, has created a Bat-Robot to take some of the burden of crime fighting off Batman's shoulders, allowing Bruce Wayne to have more leisure time.  With slight satirical nods to The Iron Giant and Robocop, the Bat-Robot rounds up Clock King, Louie the Lilac, and the Archer, allowing Bruce and Dick to go on a fishing trip. Next the Bat-Robot goes against a Joker-Riddler team-up, and an err in the robot's computations, causes the Giggling Gangsters the have the upper hand.  But Batman and Robin arrive in time to thwart the Laughing Larcenists.

Curiously, this issue has two artists.  Part 1 is drawn by Paul Rivoche, and he turns in excellent artwork.  A nice change of pace over the weak art of the last couple issues.  Part 2 is drawn by Craig Rousseau, and is not as good as Rivoche, but still good quality.

As stated earlier, Parker turns in a stronger script this time. In addition to the mild satire of Robocop and The Iron Giant, he takes a jab at the Nolan Dark Knight films, where it seemed like Bruce was constantly looking for reasons to quit being Batman (perhaps it had to do with the fact Joe Chill was captured the same night as the murder of Bruce's parents, with Chill serving nearly 20 years in prison, thus eliminating Bruce's motive to become Batman in the first place.... but I digress). It was also great to finally see The Riddler back in these pages. My biggest critique of the series is that it is trying to be like the third and fourth seasons of the TV series, instead of the far superior first season. Symbolic of that is The Riddler sat out most of those seasons after dominating the first season, and likewise, The Riddler has been absent from most of this comic book series. This issue earns a B+.

Posted by Shazamaholic at 12:14 PM No comments:

Dwayne Johnson unofficially confirms the SHAZAM! movie has been given a green light, and hints that he will be playing Black Adam in this interview:
What struck me was what he said about the secret writer hired for the script. By my great powers of deduction, I can conclude it is not Geoff Johns or David Goyer. Both of them are "company guys", and such intricate negotiating that Johnson speaks of would not be needed. It also points to the fact that this writer must be a fairly well known and big name.

Something that causes me some concern is how Johnson emphasises the movie will be "grounded". I hope they do not Nolanize the World's Mightiest Mortal. In an ironic way, this film should be more "Marvel" like than the current DC movie house style of grim, dark, and reality based. This movie needs to be a contrast, showcasing color, fun, and humor along with the action-adventure and drama and pathos. This movie should be more like Sam Raimi's Spider-Man trilogy than Chris Nolan's Dark Knight trilogy. And that brings us to the question, have they signed a director? Will they bring Alex Ross aboard as a producer and creative consultant? (they need to!)  Hopefully the answers will come very soon.
Posted by Shazamaholic at 8:04 PM No comments:

Mini-Review: Justice League Beyond TPB "In Gods We Trust" 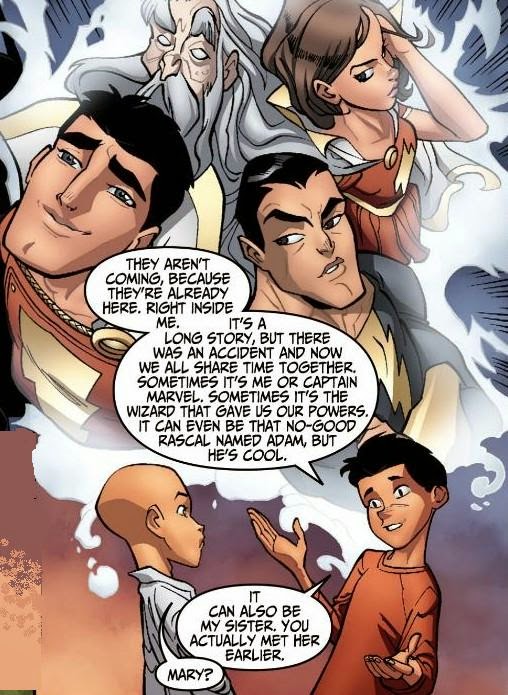 I'm a little late with this one, because I only recently discovered that Captain Marvel... yes, I said "Captain Marvel", not "Shazam"... is involved in this spin-off series to Batman Beyond.  I decided to go the trade paperback (TPB) route with this one, because the Justice League Beyond series shares a monthly title with Batman Beyond and Superman Beyond in Batman Beyond Universe. I really just want to read the Justice League Beyond series, so I thought it would save me some money to get the TPBs instead of the monthly comics.  Besides, since this is a series set in the future, it makes sense, since the traditional "pamphlet" format comic book is sure to be phased out over the next decade, leaving digital comics as the main way of getting monthly comics, and the only print options being TPBs and hardcover graphic novels.

Captain Marvel actually appears very little in this particular TPB, which half belongs to Superman Beyond, unlike the previous TPBs, which separated the two features and were half the page count and half the price. Perhaps its because there is a big JLB/Superman Beyond crossover coming.  (Note to DC: Once the crossover ends, re-separate the Justice League Beyond and Superman Beyond TPBs!)

The JLB story introduces Fawcett City as someplace considered old-fashioned. Located in the city is the Academy of Arts and Sciences, a school that is brain washing the kids into drones.  The current (future?) Green Lantern, Kai-Ro, is at the school and the JL is teleported there to get him.  There is an amusing scene where they encounter the Fawcett City locals, who are portrayed like it's Mayberry, complete with a Don Knotts-type deputy.  Kai sneaks around and meets a girl named Mary.  She informs him of the devious agenda of the school.  Both are captured by the headmistress and brainwashed, and then the headmistress and her minions capture the JL. She is about to destroy the JL at a school assembly, when Mary is urged to say the name.  She says "Shazam", and is replaced with Captain Marvel, who sets the JL free.  Captain Marvel phases out to be replaced by Mary Marvel, who punches out the headmistress. But Mary is captured by some minions, and she phases out to be replaced by Black Adam.  Then Captain Marvel phases back in and destroys the villains getaway jet with his magic lightning, turning into Billy Batson, who falls out of the sky, only to be rescued by Kai's power ring.  In an epilogue, Billy explains that some kind of accident caused the Marvel Family to share time together, with only one member allowed to be in reality at a time.  Billy is then invited to join the Justice League.

The story by Derek Fridolfs is good and presents a unique situation for the Marvel Family.  Unless it is specifically noted otherwise, I think this could be the same continuity as Billy Batson & The Magic of Shazam. Sometime after that series ended (ironically with Captain Marvel being introduced to the Justice League), the mentioned accident happened, causing the Shazam characters to share an existence, which could also explain why Billy and Mary haven't aged much in the two or so decades in between BB&TMOS and Justice League Beyond (neither does BB&TMOS contradict Captain Marvel's only other appearance in the so-called Diniverse the Beyond franchise is set in, the Justice League Unlimited episode "Clash").  The art by Ben Caldwell is excellent, and resembles Mike Norton'a art in BB&TMOS,  but with perhaps a slightly more anime look.  He draws an adorable version of Mary.  Billy and Cap are portrayed with more respect here than they are as a Geoff Johns punchline in the main Justice League New52 series.  The Justice League Beyond installment of the TPB earns a solid B+, and I can't wait to read Captain Marvel's further adventures with Justice League Beyond.
Posted by Shazamaholic at 8:08 PM No comments: 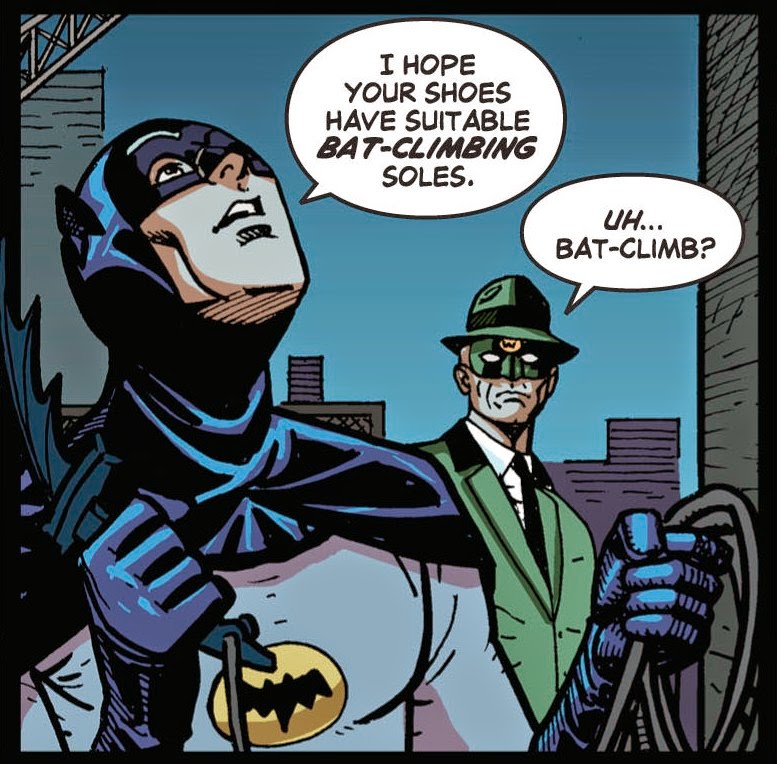 Kevin Smith and Ralph Garman continue to deliver a good story with clever moments capturing the essence of the TV series, such as the scene with the Hornet in the Batcave, and later, with him climbing up the side of a building with a batrope.  They also showcase Batman's detective abilities, something the show brushed aside in favor of letting the Batcomputer do all the thinking.  The artwork by Ty Templeton is again, excellent, and the Alex Ross cover is worth the cover price alone. This issues earns an A.
Posted by Shazamaholic at 6:26 PM No comments: