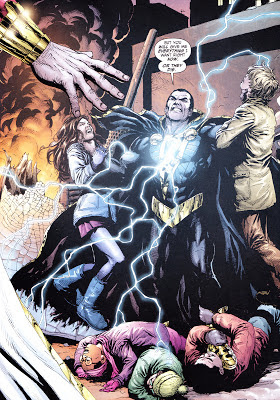 The penultimate chapter of Curse Of Shazam in JUSTICE LEAGUE #20 starts where the previous chapter left off, with Black Adam holding Billy by the mouth.  Adam berates Billy a little, then through some magic lightning connecting their eyes, Billy gets to see the real origin of Black Adam. Both the boy Aman and his uncle are at the Council of Eternity at the Rock of Eternity.  It is revealed each member of the council chose a mortal to be their champion. The main wizard, who now reveals that his name is indeed Shazam, chose Aman, but the boy asks that the Wizard save his injured uncle.  Shazam tells them both to speak his name, and both will be his champions, as Aman sharing the power with his uncle saved him.  They do, and both go on to free their people from the evil of Ibac.  But then the uncle wants to become more aggressive in dealing with evil, but Aman refuses, saying how the Wizard wants this to be an era of mercy.  It is revealed the uncle's name is Adam, and the next time the two speak the magic word, at the moment of the transformation Adam kills his nephew, absorbing the full power for himself.  Billy now knows what kind of a man Black Adam is.  Now Adam wants to kill Billy and absorb his power as well, but the other four kids ram into Adam with a truck, knocking Billy free, allowing him to transform back into Capt... er, Shazam.  Capt...er, Shazam snarls he will not run from Adam anymore, but Adam has Mary and Freddy by their throats, and is stepping on the other three.

The new twist on Adam's origin is part rehashing Captain Marvel Junior's classic origin and part setting a precedent for the Flashpoint concept of multiple people becoming the champion, which I bet will be part of the conclusion having all six kids unite to form a more powerful version of Capt... er Shazam in order to defeat Adam (also recalling the Wizard's comment to Billy that his family will be his greatest power).  We'll see if I'm right, as the conclusion to this story is next month.  Chapter 12 earns a C.
Posted by Shazamaholic at 6:52 PM No comments: