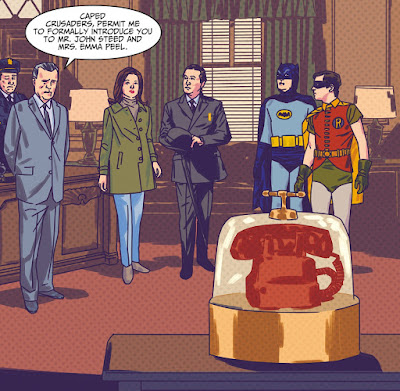 The latest Batman '66 miniseries teams up the Dynamic Duo with the British Avengers, in the form of John Steed and Emma Peel, British secret intelligence agents. The script, by Ian Edginton, is rather simple and straight forward, despite having Alfred suit up as Batman and having a couple call backs to the Tim Burton Batman films. It serves as an introduction to the characters and sets up the premise by having Catwoman, during a routine robbery, foiled by Steed and Peel before Robin and Batfred get to the scene. After she is put into a holding tank at Gotham Police Headquarters, she becomes the object of a prison break kidnap attempt by mysterious Cybernaughts.  The real piece de resistance is the artwork by Matthew Dow Smith. Where as I often complained about the artwork from the Batman '66 franchise taking on a Mad Magazine satire look, Matthew Dow Smith's artwork is exactly what I wanted to see in this franchise. It is stylized, specifically in the backgrounds, while still exhibiting a photo-realism.  It can be described as an epic, big budget version of the artwork from the Batman View-Master booklet. This is some of the best illustrations in this franchise. Kudos to Matthew Dow Smith. This issue earns an A-.
Posted by Shazamaholic at 10:00 AM No comments: