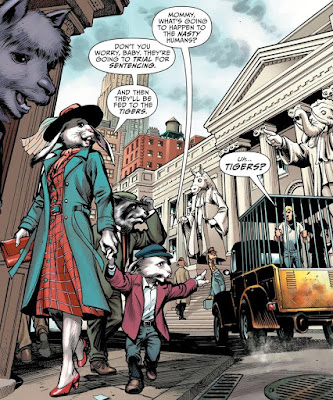 This issue opens up in the Wildlands, with Mr Tawny starting his day. This first part of the sequence is almost Fawcett-like, until Tawny steps out his building door, and it becomes evident the Wildlands are more like a Loony Tunes-Merrie Melodies cartoon (You could almost hear The Merry Go Round Broke Down playing). Tawny appears to be arrested for not being a proper tiger, i.e., he's reading a book against nature, "How To Stop Eating Your Friends".

Cut to Freddy and Special Ed... er, Darla, also in the Wildlands as they are captured by animal cops.  A missed opportunity by the creative team... they didn't make them bulls.  Freddy says Shazam but nothing happens.  Back to the Funlands, where Captain Shazam is held by King Kid.  He explains the Funlands is a haven for abused kids, and no adults are allowed. All the adults, including Mary, are slave laborers underground, and Captain Shazam joins their ranks.

Back to The Wildlands, where Freddy and Darla are on trial.  Then it's to Earth, where the Vasquezes have the cops in to find their missing kids.  Billy's "father" mentions Billy has a habit of running away.  Then it's to the Gamelands, where Latino Shazam and Asian Shazam are trapped in a game.  They find out only be beating the game master can they escape.  Then it's to the Rock of Eternity, where Black Adam notices the doors to the other realms have been breached. The next issue blurb hints it will be Black Adam who saves the day.  Of course it will, this is a Geoff "the Snake" Johns production.  He loves the villains and is indifferent to the heroes.

Johns' script is average, and with all the cutting back and forth between realms, it seems like a lot is going on, but actually not much happens.  The art by Dale Eaglesham and Marco Santucci is the usual - good yet generic.  Again, Captain Shazam is drawn to look way too much like Superman complete with spit curl.  Mayo "Sen" Naito is sorely missed this issue, and again, should be the main artist on this series. This issue earns a C.
Posted by Shazamaholic at 10:23 AM No comments:

The second and final full length trailer for Shazam! has been released.


I found it to be a shorter, re-edit of the first trailer.  Still very underwhelming.  Still too childish and jokey - catering to the fart joke connoisseur.  Still too New52. Still way too much emphasis on Big, which is the opposite of the original Fawcett era Captain Marvel. There is the one cool shot of Billy jumping off a roof and transforming to Captain Shazam... but can you really build an entire movie around one cool shot?

Let me explain it this way.  I am not much of a Fantastic Four fan.  All I know about them is the basic premise, and I don't follow or read the comics.  When Tim Story's Fantastic Four starring Jessica Alba was released, I went to see it, and I enjoyed it. I thought it was an entertaining movie. Hard core Fantastic Four fans, however, were outraged by the movie, thought it got too many things wrong, and generally despised the movie. But the general movie going public essentially enjoyed the movie like I did, and it became a hit. That is how it is going to be with Shazam!   I am clearly a hard core Captain Marvel fan, and I will hold this movie to a greater standard than I did for Fantastic Four.  I will criticize and nit pick smaller details.  As all my regular readers know, I am not a fan of the new 52 reboot of the character, and having this movie be an adaptation of that is already a major strike against it in my eyes.  Now, the general movie goer, and even the general DC supporter will probably not have such high standards for this movie, and probably do not care about the minutia of detail regarding Captain Marvel.  As with me with Fantastic Four, they will go in, enjoy it and like it if they find it an entertaining movie.  Some may like this movie simply out of brand loyalty to DC and/or Geoff Johns regardless if it is good or not.