In the second issue of POPEYE, writer Roger Langridge contributes the cover art.  While it would have been a nice variant, his drawing is a little weak to be the main cover.  Langridge's story, "The Worm Returns" is a domestic drama, dealing with Olive Oyl getting involved with an actor who is a con man. Like issue one, the story is light on humor.  Once again, I would urge Langridge to kick the humor up a notch or two.  The art by Ken Wheaton is... well, kind of confusing. In the Official Popeye Fan Club News Magazine, Ken Wheaton's artwork is very slick and polished.  A great hybrid of Segar and Fleischer.
But in POPEYE #2, Wheaton's art is much more stiff and crude.  It's like he was ordered to imitate the style of issue #1's Bruce Ozella.
This issue also has a back up story featuring Professor O.G. Watasnozzle.  It was all right, but nothing special.  Overall, POPEYE #2 gets a C.
Posted by Shazamaholic at 12:25 PM No comments: 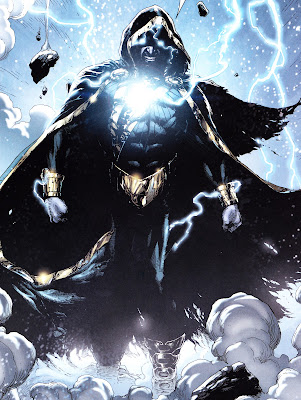 The fourth chapter of Curse of Shazam from JUSTICE LEAGUE #10, begins with the Vasquezes at the kitchen table realising Billy isn't who they thought he was from the child services interview.  It is implied both Vasquezes were also orphans, which is why they became foster parents, and hints when Mary first came to live with them, she had similar troubles to Billy's.

Cut to the boys' bedroom.  Billy sneaks out of the house, and Freddy shadows him. Billy goes to the zoo to talk to a tiger he calls Tawny.  Freddy confronts him about this.  Freddy admits to stealing Billy's wallet, seeing the picture of Tawny in it, as well as a membership card to a family finders website.  Freddy tells Billy he and the others appreciate him decking the Bryer Brothers. Freddy says the Bryers pick on them almost every day.  Billy comments he wishes he could get back at them, and Freddy says he knows where they live.  Billy gets an evil smile as Tawny roars.

Cut to Baghdad.  Sivana, who can now "see" magic, goes to Black Adam's tomb. He is able to read Black Adam was imprisoned there until a being who can destroy him is found, but he can be released with one magic word.  Sivana says "Shazam", there is a massive bolt of lightning, and Black Adam emerges from the tomb demanding to know where the Wizard is.

My thoughts: Another well done chapter.  Gary Frank's art continues to be top notch. I like the interplay between Billy and Freddy, and I can't wait to see what they have planned for the Bryers. I hope it is something worthy of the classic "Dead End Kids", and not something dumb or commonplace (like egging the front door).  We get our first look at Black Adam.  Like the new Capt... er, Shazam, he has a Spectre-like hooded cloak.  His lightning bolt emblem seems to be much more diagonal than Capt... er, Shazam's.  Like Capt... er, Shazam, Black Adam has Wonder Woman style wristbands, a sci-fi style belt, and Greek Olympian type boots.  This is where I might start to worry.  Geoff Johns has a habit of giving the spotlight to  Black Adam, while Captain Marvel remains a background character.  Personally, I would have preferred if Black Adam did not appear in this first arc.  He could easily have been saved for a second or third year arc.  Back in the Fawcett Comics era, Black Adam was just a one-shot character.  It was Ibac who was the evil counterpart to Captain Marvel. It would have been very nice to go that route, just to be different from the Roy Thomas and Jerry Ordway reboots.  But we will see. I give chapter 4 a B-.
Posted by Shazamaholic at 4:27 PM 2 comments:

I received a response from Sony regarding "The Three Stooges - Rare Treasures from the Columbia Vault" DVD.

RE: The Three Stooges - Rare Treasures from the Columbia Vault
Thank you for your e-mail. We appreciate your interest in Sony Pictures Home Entertainment (SPHE) products.

We currently do not have a published release date for this title. Please stay tuned to http://www.sonypictures.com/ or the website http://www.imdb.com/ for additional information regarding upcoming Sony Pictures Home Entertainment releases.

Also, please check in regularly with your local retailers to see what's new in store!

Thank you for your continued patronage and for taking the time to contact us.

It's good news so far as he did not confirm "Rare Treasures" will never be released individually.  My guess is it will be released by winter, most likely in time for the Christmas season. We just need to wait it out.

And don't forget to continue to write in to Warner Brothers, as they have 30 or so Shemp Howard solo shorts produced by Vitaphone to release on DVD.  See the original post for details.
Posted by Shazamaholic at 11:26 AM No comments:

On June 5, Sony finally released the solo Columbia Shemp Howard shorts in a 3 disc set titled "The Three Stooges - Rare Treasures from the Columbia Vault", along with the solo Joe Besser and Joe DeRita shorts, and the Stooges starring feature film, Rockin' In The Rockies.  There is one huge catch though.  At the moment it is only available as part of a 20 disc box set that collects the individual "Three Stooges Collection" volumes.  I bought all the individual volumes when they were released, as I'm sure most Three Stooges fans have.  But I want those Shemp Howard shorts on DVD. So, are we to be punished for being loyal customers?  Will Sony release "The Three Stooges - Rare Treasures from the Columbia Vault" individually for those of us who already own the individual volumes, and do not want to rebuy them in a box set?

I sent an email to Sony:

I am a Three Stooges fan. I was thrilled when you released "The Three Stooges Collection". I have also been petitioning you to release the solo Shemp Howard Columbia shorts on DVD. I posted entries about it on my blog, www.shazamaholic.blogspot.com


I would appreciate it very much if you could reply to me, and let me know if and when The Three Stooges - Rare Treasures from the Columbia Vault will be sold individually.


I will be reporting about this on my blog.


Thank you very much for your time.

If you are a Stooges fan like me, who already purchased all the individual volumes, and just want to buy "The Three Stoogese -Rare Treasures From The Columbia Vault", you can email Sony at
consumer@SPHECustomerSupport.sony.com

I will keep you informed as to any response I get from Sony.

And don't forget to continue to write in to Warner Brothers, as they have 30 or so Shemp Howard solo shorts produced by Vitaphone to release on DVD. See the original post for details.
Posted by Shazamaholic at 2:02 PM 7 comments:

News on Batman '66 and Shazam movie 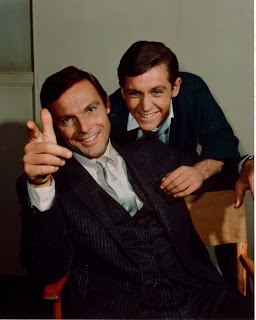 It's been a wild day for fans of the 1966-68 Batman TV series. Variety reports a deal has been made by Warner Brothers and 20th Century Fox regarding the classic show, where merchandise and memorabilia will now be produced using the images and likenesses from the series.  Speculation is that a deal has also been made to finally get the series on DVD, with an official announcement coming at this year's Comic Con.

In addition to the Bat-news, Variety also reports that the Shazam! movie is still alive and in development.
Posted by Shazamaholic at 4:39 PM No comments: