"She Makes Me Laugh", The Monkees' new single

Here's The Monkees' new single, "She Makes Me Laugh", from their upcoming new album, Good Times!
A catchy song that has a retro-60s sound, similar to their 1986 tracks, "That Was Then, This Is Now" and "Anytime, Anyplace, Anywhere" .  If it gets radio airplay, it could be a big summer hit.  Micky is on lead vocals, Mike is on harmony vocals and acoustic guitar, and Peter is on banjo and background vocals.

Mike introduced the song on his Facebook page by commenting, "Welp. Here we go -- remember there are all kinds of immortality and this one looks pretty happy. :)"

I can't add more than that. Enjoy.

Posted by Shazamaholic at 9:22 AM No comments: 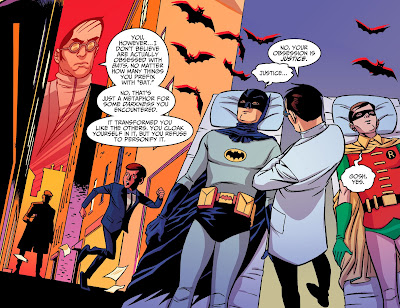 This issue opens with the mysterious Corvid being revealed to be Arkham's Dr Hugo, who turns out to be really Professor Hugo Strange. The C and D list villains seem to be a little peeved that they have been working for the doctor that has held them in Arkham, but Strange quickly talks them down by revealing his taking the position at Arkham was for the goal of recruiting THRUSH agents. Strange them leads his captives and reveals his plans to make the world a utopia via psychological manipulation. The heroes and UNCLE agents are gassed and Strange attempt to brainwash them to his side.  The first brainwashing session seems to have no impact and the captives attempt to escape only to fall into the clutches of a giant octopus. The script by Jeff Parker stays the course. His sequence of Strange attempting to brainwash Batman and the others seems to drift more into Batman The Animated Series territory than the 1966 TV series. David Hahn again turns in very good artwork.  This issue earns another B.
Posted by Shazamaholic at 11:36 AM No comments:

With the Monkees' restored HD Blu Ray box set and new album, Good Times, about to be released on this 50th anniversary year, I thought I would offer this perspective.

First a disclaimer.  This is not a thoroughly researched doctor's thesis.  My doctor can research his own thesis. This is just my perspective from when I was growing up when the Monkees TV series was a staple of UHF stations, and their Greatest Hits album was in every neighborhood kid's record collection.

What I seem to recall is that us guys seemed to be bigger Monkees fans, while the girls seemed to prefer the Beatles.  The obvious reason for this could be the TV series.  Much like The Three Stooges, which is considered "a guy thing" that girls never got, the Monkees TV series, with it's fast paced comedy, drew the guys in while the girls shrugged at the whole notion.  But I think it went deeper than that. 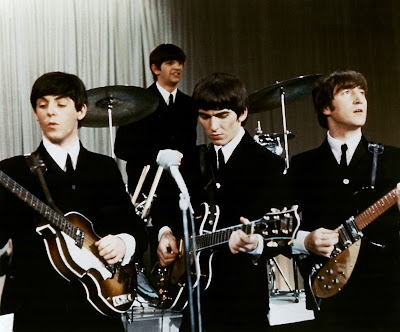 After doing a quick analysis of both groups' songs, I came to this conclusion. The Beatles catalog, for the most part, was aimed at girls.  The majority of their songs, although there were certainly some exceptions, dealt with peace and love and happiness and romance.  The Beatles were a chick's group.

The Monkees, on the other hand, had the majority of their songs aimed to a guy's life experiences. In the Monkees' music continuity, girls were not the objects of happiness and romance to be adored and put on a pedestal like in the Beatles' world.  In the Monkees' world, girls were most often backstabbing heart-breakers ("She", "Mary Mary", "Stepping Stone", "Tomorrow's Gonna Be Another Day", "Gonna Buy Me A Dog", among others),  people not to be trusted ("The Girl I Knew Somewhere", "You Told Me", "Forget That Girl", "Cuddly Toy", "Words", among others), and selfish users ("Star Collector", "She Hangs Out").

I was listening to "Sunny Girlfriend", thinking it was a typical teenage love song.  The whole song is about saying how great this girl is.  But then the final line reveals the truth- no matter how wonderful you think this girl is, and how much you're in love with her, "she doesn't really care".  That kind of songwriting speaks to pre-teen and teenage guys.

Even in the Monkees' more traditional and optimistic love songs, the guy seems to be falling in love against his will, if you really listen to "I'm A Believer" and "Love Is Only Sleeping" and "Look Out Here Comes Tomorrow" and "What Am I Doing Hanging 'Round".

So, my unscientific conclusion as to why, when I was growing up in my Midwest neighborhood, the guys were Monkees fans while the girls were Beatles fans, is that the Beatles tailored their songs to girls, and the Monkees tailored their songs to boys.  Just don't ask me why then Monkees concerts are loaded with girls in the audience. But then, why should I speak, since I know nothing?
Posted by Shazamaholic at 6:43 PM No comments: