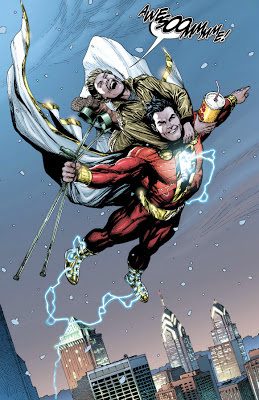 Chapter 8 of Curse Of Shazam in JUSTICE LEAGUE #15 opens with Capt... er, Shazam, still in his Jethro topcoat, and Freddy on a bench eating hamburgers.  They realize they only have 75¢ left from their reward.  Not enough to buy beer.  They go to an ATM where Freddy tells Capt... er, Shazam, to put a spell on it to get money.  He speaks a childish incantation, ending with Shazam.  Lightning shoots out from his hands, and hits the ATM, which then starts spitting out all the money.  As they panic, for the money won't stop shooting out, they notice the bank is being robbed by other guys.  Capt... er, Shazam inadvertently stops the robbers.  A couple spectators ask who the figure in red is, and he replies, "uh... Shazam?"  Freddy and Shazam run off, only to stumble into another robbery, where the unlikely heroes are rewarded with all the junk food they can eat. Then they find themselves stopping a car theft.  Noticing how they seem to keep finding crimes being committed, an image of crystal named Francesca, whom only Shazam can see, confirms that he is being drawn to places where a champion is needed.  Francesca warns him Black Adam is looking for him as Shazam discovers he can fly.  As Freddy and Shazam enjoy the new power, Freddy decides perhaps its time for Shazam to turn back into Billy so they can go back home to the Vasquezes.  Shazam disagrees, intending to stay in his super powered form forever.  Freddy accuses Shazam of starting to act just like a grown up, and splits.  Suddenly, Black Adam finds Shazam, setting up a big fight in the next chapter.

This chapter has more of the Big Red Cheese acting like a goofy kid, and doing juvenile antics with Freddy (not cool, "Dead End Kids" style antics, just dumb kid antics) on their quest to buy beer.  One of the weaker aspects of the ever loathed Trials Of Shazam this new series clings to (besides the hooded cloak), is the idea the magic word does not trigger any transformation on its own, but rather the change must be willed.  Ultimately, this makes the magic word pointless.  Hopefully the big fight in the next issue will be an event, because so far, ever since Billy transformed into Capt... er, Shazam, the series has gone downhill.  Chapter 8 earns a C.
Posted by Shazamaholic at 4:16 PM No comments:

If you recall, I predicted the 9th volume of THREE STOOGES COLLECTION, Rare Treasures From The Columbia Vault, would be released individually by Christmas. I was off by a month. The announced release date is January 1, 2013.

There has been no formal announcement of the 1966 Batman TV series being released on DVD despite an agreement for merchandise based on the show, but the 1974 Shazam TV series has been released. It was great to see those shows again. Since it was an anthology show, it was kind of the precursor to the Bill Bixby Incredible Hulk series, which had a similar format. The show has some good moments, and indeed has a fair share of nods to both the comics (there are several references to Billy working at station WHIZ, and some moments between Billy and Mentor -who comes off as a slight variation of Uncle Dudley- have a Binder & Beck flavor to them) and the 1941 serial (the original Billy Batson, Frank Coghlan Jr, guest stars in an episode). Its weird, though, that the "morals" segments were done separately from the series, and the master tape lost, forcing WB Archive to use VHS copies. Thankfully, the episodes themselves are from the masters, and look great. Although, things definitely went down hill in the last 11 episodes where John Davey takes over the role of Fat Marv... er, Captain Marvel. Now if only WB Archive would release a DVD collecting all 13 of the 1980 Filmation Shazam cartoons, many of which written by Paul Dini.

The Monkees did a quick tour this winter. Watching some great clips on You Tube, Micky, Mike and Peter performed incredibly. As expected, the set list was Nez heavy and some of the show's highlights were rarely performed gems like Tapioca Tundra, Sweet Young Thing, and a hilarious version of Daily Nightly. I understand a concert was audio recorded for possible CD release, but unfortunately none of the concerts were professionally filmed for DVD release. However, The Monkees' current quasi-manager, Andrew Sandoval, hinted another tour may happen this summer. This quick winter tour was more or less a trial run, and bigger things may be planned for the future, as rumors circulate that Dolenz, Tork, and Nesmith were planning on forming an act without Jones for several months prior to Davy's death.
Posted by Shazamaholic at 7:13 PM No comments:

Well, its been a whole year since the new English translation of the Roman Missal has been promulgated.  I can neither say it has been a success nor a failure. The rebellion against the translation the critics on the left were hoping for never happened.  The vast majority accepted the new English words with nary a kick or a scream.  Yet, there hasn't been a fundamental change in the way Mass is celebrated in the typical parish, either.  Despite the new words, there are still the stripped down sanctuaries, with tiny wood altars that look like dining room tables.  There is still the hand holding, the banal Broadway show tune Mass Settings and adult contemporary hymns that celebrate people while ignoring all things mystical and spiritual.  In the typical parish, mine included, Mass is still a liturgical Woodstock wannabe. I don't listen to Broadway show tunes.  Why in the world would I want to go to Church and hear Mass settings in a Broadway style? What I have come to realize is that the problem is in the rubrics, or more accurately the lack of rubrics, in the Ordinary Form (rubrics are the actions that go along with the words, such as kneeling, facing ad orientum, how often the priest makes the sign of the cross, etc... think of it as choreography).  The Ordinary Form, aka Novus Ordo, was fabricated by Annibale Bugnini, and was to be a simplified form.  It has so few rubrics, it allows priests to celebrate, or rather "preside" (as the Novus Ordo rubrics call it) Mass in their own individual styles, and sadly, many adopted a hippie social worker style that seems to be eternally stuck in the early 1970s.

I find myself agreeing with comedian Jimmy Fallon, who expressed his thoughts on the Catholic Mass in this interview with NPR.  On the traditional Mass, he said,
"I just, I loved the church. I loved the idea of it. I loved the smell of the incense. I loved the feeling you get when you left church. I loved like how this priest can make people feel this good. I just thought it was, I loved the whole idea of it. My grandfather was very religious, so I used to go to mass with him at like 6:45 in the morning serve mass and then you made money too if you did weddings and funerals. They'd give you, you'd get like five bucks. And so I go okay, I can make money too. I go this could be a good deal for me. I thought I had the calling. "

But on the way Mass has gone since the Novus Ordo was implemented, he said,
"I don't go to - I tried to go back. When I was out in L.A. and I was like kind of struggling for a bit I went to church for a while, but it's kind of, it's gotten gigantic now for me. It's like too, there's a band. There's a band there now and you got to, you have to hold hands with people through the whole mass now, and I don't like doing that. You know, I mean it used to be the shaking hands piece was the only time you touched each other. Now I'm holding, now I'm lifting people. Like Simba. I'm holding them, ha nah hey nah ho.  I'm doing too much. I don't want - there's Frisbees being thrown, there's beach balls going around, people waving lighters, and I go this is too much for me. I want the old way. I want to hang out with the, you know, with the nuns, you know, that was my favorite type of mass, and the Grotto and just like straight up, just mass-mass."

I find myself having similar thoughts.  My own parish has the casual, Broadway-Woodstock style Mass, that I find increasing difficult to sit through.  I want tradition.  I want to hear chant. I want some Latin. I want to hear bells and smell incense.  I want the priest to be a spiritual leader, leading us in prayer and sermonizing about faith and miracles, not a performer who tries to entertain us, while making social justice his only message.  There is another parish in my neighborhood that has a more traditional Mass, with bells, incense, chant, and even some Latin.  They even have the Extraordinary Form (aka Tridentine Latin Mass) every week.  Can I bring myself to quit my parish and join this other one?  In time, I may not have a choice, if going to Mass at my parish continues to be like a chore or a penance to suffer through.

If I had the Pope's ear, I would humbly suggest to him that the Order of the Mass for the Ordinary Form needs to be reformed.  The 1965 Order should be restored to the Ordinary Form Roman Missal, replacing the Annibale Bugnini fabricated Order.  The 1965 Order of the Mass was, essentially, a vernacular translation of the Tridentine Latin Order, slightly simplified in rubrics, with some repetition removed, thus making it fulfill Vatican II's requirements- - in fact, the 1965 Missal was heralded "The Mass Of Vatican II".
Posted by Shazamaholic at 2:32 PM No comments: