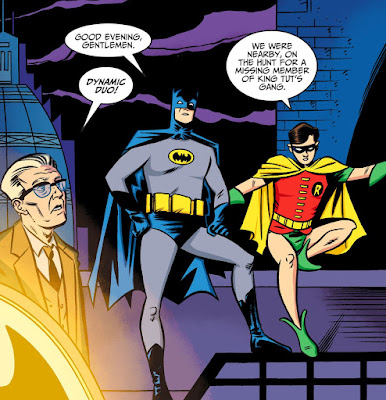 This issue features two short stories.  The first introduces the Scarecrow into the 66 Universe. Writer Jeff Parker turns in an acceptable script, but he misses some golden opportunities. It was established that Shame used fear gas in the TV series, so why didn't Parker, who loves to team up TV villains with comic book villains, allude to Crane getting his fear gas from Shame, rather than a hillbilly backstory, or Batman using a sample of Shame's fear gas to deduce the ingredients of Scarecrow's?  Batman and Robin's fear hallucinations come off as an attempt to conform this series with generic DC continuity. The art is by Lukas Ketner, and while not the best art in this series, it is much better than the recent, sloppy and crude art in this series.  This story earns a C.

The second story introduces Croc to the 66 Universe, after an origin tied to King Tut from an earlier issue, and Parker's script seems very rushed. As with other recent issues, the inclusion of this modern character into the 66 Universe just doesn't work, and feels forced by corporate mandate. The art by Dean Haspiel seems crude in some panels, but overall has a moody tone that rises above its shortcomings. This story earns a D, giving this issue a C-.
Posted by Shazamaholic at 11:41 AM No comments: