At 8PM Rome time on February 28, Pope Benedict XVI abdicates from the papacy. On his last full day as pope, Pope Benedict XVI delivered a personal and emotional farewell address to a cheering crowd, thanking the faithful around the world for their support and assuring them that he would remain in their service even in retirement. He also promised unconditional reverence and obedience to the next Pontiff.

Citing  the weakness of old age preventing him from continuing on, speculation is that there is a more terminal health issue at the heart of the matter.  Regardless, I wish Pope Benedict XVI a happy retirement, and I thank him for his nearly eight year pontificate.  I thank him for beginning the process to restore Catholic tradition and culture, and taking the first steps to mend the rift with the Society of St Pius X, two things I hope the next pope will continue.  I thank him for releasing the Extraordinary Form of the Mass from its false banishment, and for beginning the process to reform and correct the Ordinary Form and the implementation of Vatican II.

I remember eight short years ago, watching on TV as the white smoke appeared. I had a gut feeling as early as the mid-to-late 1990s Cardinal Ratzinger would be the next pope after John Paul II.  As soon as Cardinal Medina announced "Joseph", and before he could say "Ratzinger", I knew. 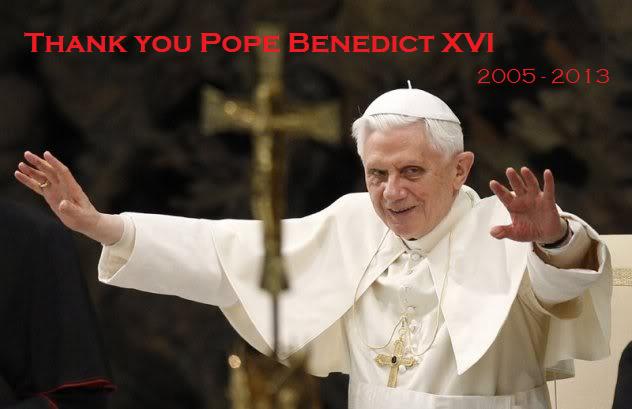 Posted by Shazamaholic at 9:54 PM No comments: