To celebrate Elvis Presley being honored by President Donald Trump with the Presidential Medal of Freedom, I thought I'd take the opportunity to add to my previous list of Elvis' best overlooked and under appreciated recordings. 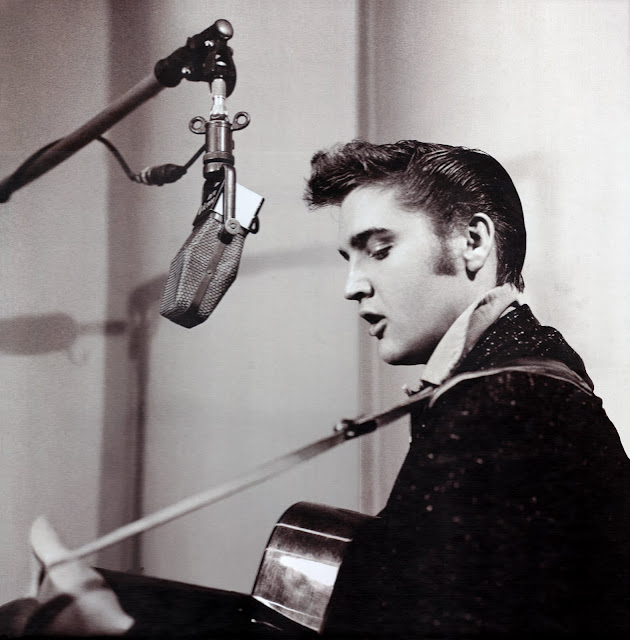 Good Rockin' Tonight One of Elvis' Sun singles that just doesn't get enough love these days.

Milkcow Blues Boogie is another Sun single that seems to have fallen into the obscure, but has the great lyric "if you don't believe I'm leavin', you can count the days I'm gone".

I Was The One The flip side to Heartbreak Hotel, RCA initially thought it would be the hit.  A classic doo-wop ballad that set the standard for all doo-wop ballads that would come in it's wake.

Too Much is one of Elvis' hits from 1957 that sadly, is today mostly forgotten.

I Need You So is a blues style ballad that that has a beat and swings, with Elvis' vocal really selling it.

So Glad You're Mine is a honky-tonk blues tune written by Arthur Crudup (That's All Right) with some raunchy lyrics.

Is It So Strange is another ballad that Elvis' voice soars to another level.

When It Rains It Really Pours is a song Elvis attempted in the Sun years, but went unreleased.  He tried it again at RCA with a fuller sound (but less lyrics), and still unhappy with the performance, it went on the shelf for several years until finally getting released in 1965.

King Creole, the title song from one of his best movies, showcases Elvis with a bigger, Dixieland influenced sound that still rocks.

The Girl of My Best Friend is a bouncy song of unrequited love.

Reconsider Baby A track from the brilliant Elvis is Back! album is perhaps his finest blues performance, with a killer saxophone solo by Boots Randolph.

I Got Lucky  A song from the movie Kid Galahad, this mid-tempo number is all charm and happiness.

One Broken Heart For Sale is a quick but great tune written by one of Elvis' best songwriters, Otis Blackwell.

I Gotta Know is a mid-temp rocker with clever lyrics.

It Hurts Me is another great song where Elvis pleads for an unrequited love to give him a chance. Elvis also performed this song in a memorable sequence on his 1968 Comeback Special.

Night Life is an outtake from Viva Las Vegas. Its surprising it has never yet been used to promote Vegas tourism.

Down in the Alley is a great blues jam.

Witchcraft  A completely different song than the standard made famous by Sinatra, but one that swings and rocks.

She's a Machine  A song from Easy Come Easy Go about a girl who is every boy's dream and every mother's nightmare.

Clean Up Your Own Backyard is a great tune accented by some fine resonator guitar riffs.

Polk Salad Annie  A song Elvis never recorded a studio version of, but the live version shows the energy of his concerts in the 1970s.

The Fool is a kind of funky Country track.

Funny How Time Slips Away has Elvis taking the Willie Nelson standard into a bluesy zone.

If You Don't Come Back has Elvis returning to the blues, recorded at the famous Stax studios.
Posted by Shazamaholic at 1:23 PM No comments: