The final chapter of Curse Of Shazam in JUSTICE LEAGUE #21 begins with the seven deadly sins finding their host: Mr Bryer.  They posses him and he turns into a giant satanic beast.  Sivana, meanwhile, is experiencing the effects of magic on his un-enchanted body, as he becomes more troll like in appearance.  Cut to Black Adam with Capt... er, Shazam and the other kids. Adam tells them the seven deadly sins will burn the city to cinders, and only he can save it, if Billy surrenders his magic to him.  Upon Adam threatening to kill Freddy, Mary and the others, Capt... er, Shazam agrees, but then Francesca, via a reflection in a puddle, reminds him of the Wizard's words. He yells "Shazam!", but instead of surrendering the power to Adam, he has enchanted the other kids, creating The Shazam Family. 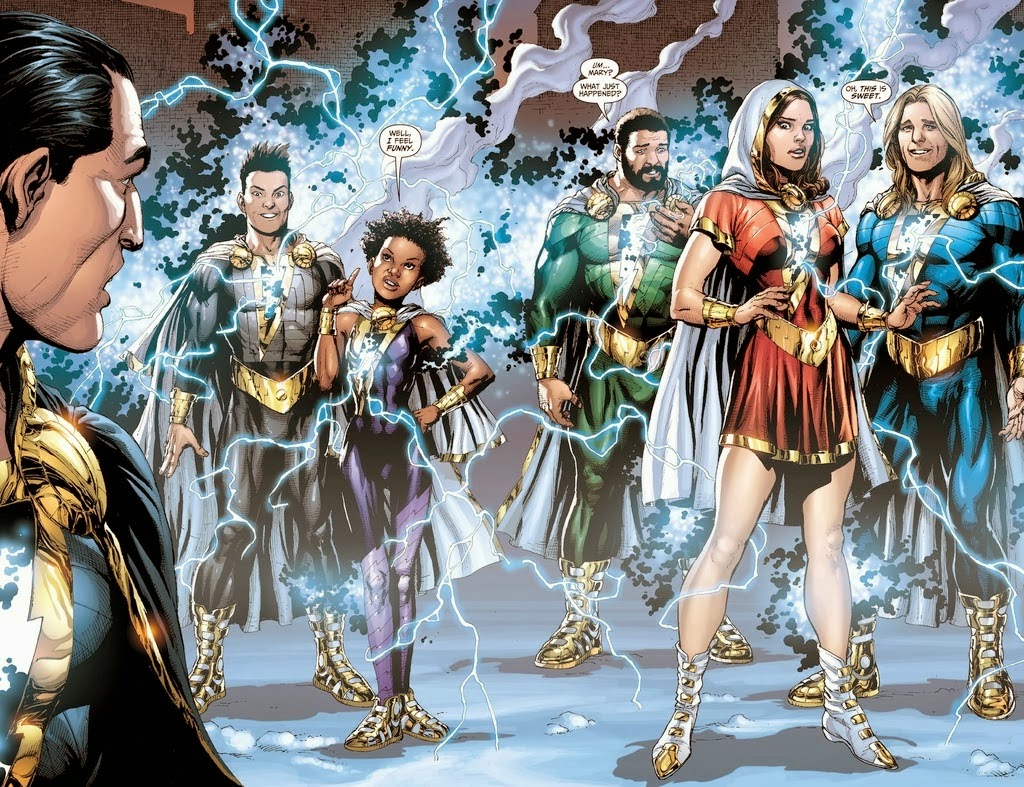 All six tackle Adam, as he fights back.  Capt... er, Shazam, tells the others to evacuate the streets, while he will take care of Black Adam.  There is a showdown between the two, as the others evacuate the city.  Mary is able to take on Bryer in his demon form.  Back at the showdown, Tawny stalks Adam, but he swats the tiger away.  Capt...er, Shazam reveals he has a kinship to the tiger, as visiting him at the zoo with his parents is one of his cherished memories, and considers Tawny family.  He quickly enchants Tawny, turning him into a battle cat, but he did the spell incorrectly, causing him and the other members of the Shazam Family to weaken as their enchantments fade.  Soon, the Family is back to their normal selves, as Adam and Capt... er, Shazam fight to a standstill.  He transforms back into Billy, and cons Adam into reverting back to his mortal self.  Within seconds, he ages hundreds of years, and dies.  Billy transforms back into his enchanted form, as the seven deadly sins leave Bryer, now able to roam free without a host upon Black Adam's death.  Bryer is humiliated one more time, as he stand naked in front of a crowd. Everyone cheers the new Champion of Magic.  It's Christmas morning, and Billy decides to stay with his new family at the Vasquez house.  Then a epilogue of Sivana, somewhere in New York, completely troll like in appearance, discovering  a talking worm who calls himself Mr Mind.

The final chapter was fairly good, much better than some of the previous chapters.  As predicted, the whole Shazam Family was brought in very quickly.  Not just Mary and Freddy, but the other three kids as well, which siphons the spotlight off  Capt... er, Shazam, and underscores he needs a team to defeat the enemy.  None of the Shazam Family's names were revealed, except for Freddy, who called himself "King Shazam". My guess his hair would turn black in the enchanted form, as a nod to Elvis, who had light brown hair naturally, and dyed it black when he became famous, did not happen.  Rather, King Shazam has long, Thor-like blond hair.  The epilogue is a certain lead in to an on going series, but none is planned at the moment.  Chapter 13 earns a B.

On the other hand, Curse Of Shazam in its entirety earns a C-.  It has some good moments, a couple good concepts, but often falls back on the same shtick that has prevented the DC version of the Captain Marvel character from soaring back to his Golden Age Fawcett greatness.  Many of the changes Johns made to the essentials of the characters are pointless, as they are not the problem.  The problem is keeping the character pigeon holed in a "Big in tights" mentality, albeit now with a slight Harry Potter twist to it.  Adding the three new kids only dilutes Billy even more.  Geoff Johns has a legion of fans who will blindly follow him wherever he leads.  They may insure the new "Shazam" is somewhat successful.  But to really get Captain Marvel back to his full glory, the only solution to me seems to be to bring in Alex Ross, perhaps with an assist by Mark Waid or Paul Dini, to give us the character as he was in the Justice miniseries.
Posted by Shazamaholic at 4:12 PM 7 comments: 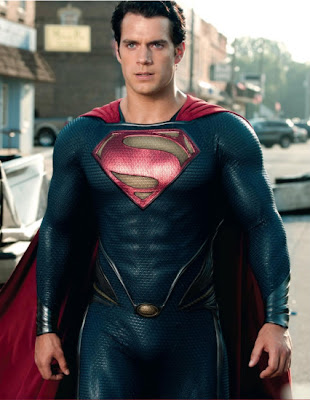 Go big or go home.  Zack Snyder certainly did go big with Man Of Steel. The rebooted Superman movie, much like the 1978 original, is a three act play, and is probably the most sci-fi oriented telling of the character in its 75 year history.  Act One, as with the 1978 version, is Krypton. But unlike the Krypton of 1978, an albino desert with crystal architecture, this Krypton is a fully formed and thought out planet, futuristic yet rustic, punctuated by Jor-El (Russell Crow) hopping on a giant Kryptonian mosquito like an outer space cowboy (that's not the only Western theme in this movie, as you'll see later).  The movie starts on the birth of Kal-El, the first naturally born child in centuries on Krypton.  The Krypton sequence unfolds pretty much as expected, except a twist is that Zod (Michael Shannon, in a well delivered, wide-eyed mentally unstable performance) kills Jor-El right as the rocket with Kal-El launches.  Zod and his minions are rounded up and sentenced to the Phantom Zone, and Krypton explodes.

Act Two goes into a cut and paste of the Batman Begins script, but unlike that agonizingly boring movie, the inter cutting of flashbacks to tell young Clark Kent's history works much better here.  Clark is a nomad, travelling around, helping people when he can while keeping a low profile. At one point when Clark is hitch hiking, I half expected the old Incredible Hulk  TV show theme song to start playing.  The flashbacks to his childhood are well done, and in some cases heartbreaking. Like when Clark, upon told he is an alien and the answer to the question of life on other planets, begs Jonathan Kent (Kevin Costner, who gives the role a slightly cruel X Files spin) to continue to pretend he's his son, to which Jonathan embraces the boy saying he is his son.  Likewise a moment when a tornado is destructively tearing thru Smallville, and Jonathan runs into it to free the family dog. As Jonathan is about to meet certain doom, Clark is about to race to rescue his dad, only to have Jonathan decisively raise his hand for Clark to stop, so the witnesses will not see Clark use his powers, sacrificing his own life to keep Clark from revealing his alien nature.  We also get to see glimpses of familiar Smallville characters Pete Ross and Lana Lang, the latter played by an adorable Jadin Gould, who bears more than a passing resemblance to Kristin Kruek, the well loved Lana from the Smallville  TV series.

Lois Lane (the pretty but somewhat miscast Amy Adams) enters the scene as the military discover an alien craft in ice thousands of years old.  It turns out to be this movie's version of the Fortress of Solitude.  She meets Clark, and he saves her life when she trespasses into the Fortress setting off some security devices.  Back in Metropolis, she does some detective work and quickly learns the mysterious man of steel is Clark Kent from Smallville.  Clark, meanwhile, in the Fortress, enables a sort of computer program that has Jor-El's intellect, and it teaches Clark all about his history.

Act Three begins when Superman emerges from the Fortress, and starts pushing and experimenting with his powers, learning how to fly, perhaps the only moment in the film where Clark smiles (and I half expected the theme song from The Greatest American Hero to start playing).  Zod and his minions have located earth and warn the people to turn over Kal-El or there will be destruction.  After seeking guidance from a Catholic priest, Superman turns himself into the US military as a sign of good will in hopes to work together in reigning in Zod. The movie goes into full blown action-film mode at this point with one high octane action sequence after another, and lots of dizzying fight scenes, and so much collateral damage, you have to wonder if there is any spot in the US not destroyed by the end of the movie.  Once again a Western theme is highlighted in a High Noon type showdown between Superman and Faora (Antje Traue in a performance that schools Anne Hathaway on how to play a villainess), one of the all too few whimsical moments in the overly serious film.  After most of the Kryptonians are sent back to the Phantom Zone, and Superman is forced to take Zod's life in order to save several humans, as an after thought, we get to see Clark Kent, in glasses, getting a job at the Daily Planet, with a wink to Lois, who's in on the secret.

Man Of Steel is a definite improvement over the somewhat creepy Superman Returns, however what it lacked was one really great scene that would be the movie's crown jewel.  In Superman Returns it was unquestionably the plane and space shuttle rescue over the baseball field.  Man of Steel lacks such a moment,  or maybe in its third act, has so many of those moments, none can stand out.  Henry Cavill does a good job in the role with the material he's given.  He does not imitate Christopher Reeve, as Brandon Routh did.  But he doesn't quite make the role his own, either. There are some shots where I thought he looked too much like Tom Welling. He lacked some personality, as there is virtually no humor in the movie.  Superman can have some gloom and darkness, but he still has to have some hope, as the great new retro-Fleischer S shield is supposed to be the Kryponian symbol for. Ironically Cavill's performance and the movie in general have a bit of a "hopelessness" air to it.  The film would have benefited with some more humor and a little less of Clark crying or screaming. As mentioned, Amy Adams is somewhat miscast as Lois. She comes off as too sweet.  Lois is supposed to have a "hot bitch" quality to her that Adams just doesn't have.  Mila Kunis, who was in the running for the role, would have been a better choice.  Laurence Fishburne's Perry White, Rebecca Buller's Jenny Olsen (the gender changed Jimmy Olsen) and Michael Kelly's Steve Lombard all were fairly generic with no real characterizations.  The Daily Planet staff seem to be in the movie simply because they have to be.  In that regard, Superman Returns did a better job.  I always felt David Goyer was over rated, and with The Dark Knight Rises and Man Of Steel under his belt, it seems a lot of fans are starting to feel that way, also.  Hans Zimmer's score, as with his three Batman movies, is instantly forgettable.

All in all, despite getting some things wrong, I enjoyed Man Of Steel and thought it was a better movie than Superman Returns and Batman Begins and equal to or even slightly better than The Dark Knight Rises. However, it didn't surpass The Dark Knight, which is what DC and WB needed for Man Of Steel to be the tent pole of an entire DC Universe franchise of movies.  Can it still happen? Possibly.  Depends on how the final box office looks. After all, Superman Returns made a profit.  It just didn't make a super profit.
Posted by Shazamaholic at 4:46 PM No comments: