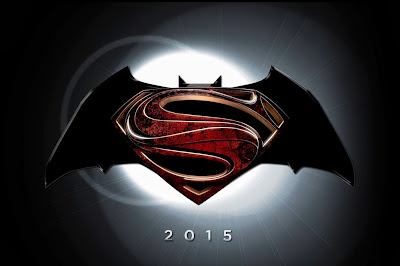 At the San Diego Comic Con, Man Of Steel director Zack Snyder confirmed there will be a sequel, even though the movie dropped drastically from first place at the box office to tenth in only four weeks.  Further more, it will feature Batman. Perhaps, by putting Batman in the sequel is Warner Brothers' insurance policy that the movie will have better legs and not dive bomb off the box office like Man Of Steel did.  Will the new movie be titled World's Finest ?

While I liked Man Of Steel when I first saw it, and wrote my review, upon thinking about the movie more, I found I began to like it less and less.  A good example is Jonathan Kent.  Originally I thought how he died was moving.  But after thinking about it, I realised how dumb it was. I disliked the whole X-Files approach to the character and feel a more meaningful death is like in the original Richard Donner movie, where he dies and there is nothing Clark, with all his powers, can do to prevent it.  Here, Clark is just being ordered by Jonathan to do nothing. Really stupid the more I think about it.  The whole movie is kind of like that.

There is a big question as to how Batman will be portrayed.  We do know this will be a rebooted Batman, and not the version from the Christian Bale-Christopher Nolan movies.  It looks like Snyder will have some major creative control as to how Batman is rebooted for the screen. It also brings up the question, "who will be cast as Batman?"  Snyder, at the Comic Con, had an actor read a line from Frank Miller's Dark Knight Returns after making the announcement.  Snyder was once rumored to be interested in filming a live action version of the Miller graphic novel.  This could lead one to believe Snyder's rebooted Batman will be very much influenced by Frank Miller, emphasised by the fact the new Bat emblem shown for the Man Of Steel sequel/World's Finest movie looks just like Miller's artwork (thankfully the awful Crow like emblem from the Nolan movies is history)... hopefully the new Batman costume will be better, also, and the new actor won't speak like he has throat cancer. But the bad news is David Goyer once again will be back to co-write the script.  Really, this guy is way over rated, and he has too much influence over the DC movies.  It's past due to bring in some fresh blood on this. Snyder should bring in Frank Miller to co-write the script with, and drop Goyer. This could also lead to Miller taking over as director for the Batman franchise when it spins off from The World's Finest.

Posted by Shazamaholic at 4:41 PM 4 comments: 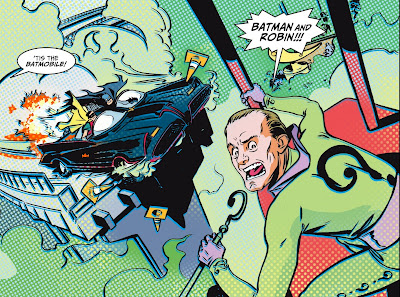 You might want to check the weather report, as there may be a snowstorm in Hell right now. DC has done what was unthinkable just a couple years ago.  They have published the first issue of a new, on-going Batman series based on the 1966 TV show.  Batman '66 is not, however, a pure adaption of the series. That's a good thing, since the series strictly followed a set formula with a sameness to the episodes which caused the show to fizzle out very quickly.  In many respects, this series is more like a hybrid of the TV show, the 1968 Filmation cartoon which, while based on the live-action show, had a lot more action and variety to the storytelling, and mid-1960s DC Batman comic books.  Indeed, the first story in issue 1 showcases The Riddler, in all his Frank Gorshin glory, but with an extended action piece that would be inconceivable by the TV show's budget and primitive special effects technology.  The second story is part 2 of the Riddler caper, and introduces us to Catwoman, while the third story concludes the adventure. The art, by Jonathan Case, also captures Adam West's likeness to a T, as well as Burt Ward and Julie Newmar.  However, due to legal restrictions by the estates, the likenesses of Neil Hamilton, Stafford Repp, and Madge Blake could not be used. The design for those characters look very much like the ones used for the early installments of the 1966 Batman newspaper comic strip, itself based on the TV series rather than the comics.  Speaking of which, I'd love to see DC publish a spin-off TPB collecting the first couple years of the newspaper strips.  While the TV show was on the air, the strips apparently had TV series style humor and special guests, like Jack Benny! And the new comic also follows suite by having a Bat-climb window cameo (by Count Dracula).  The script by Jeff Parker, keeps the characters in the TV show spirit, but, thankfully, doesn't reduce the Dynamic Duo to buffoons the way most second and third season episodes did. Parker seems to mix in the flavor of TV show head scriptwriter Lorenzo Semple Jr with a dash of Paul Dini of Batman The Animated Series.  Issue #1 is something a Batman comic has not been in too long a time: fun. I also finally get to see the real Dynamic Duo in action again, instead of Bruce with one of the multitude of inferior replacement Robins (and please, DC, do not, DO NOT, DO NOT have Dick Grayson become Nightwing in this continuity!!!!).  Word has it the digital first copy has sold very very well.  If the print edition also becomes a big hit, who knows, this may have a positive effect on the wretched DCnU continuity, and perhaps even the next Batman movie. Batman '66 #1 earns an A.
Posted by Shazamaholic at 10:16 AM 2 comments: