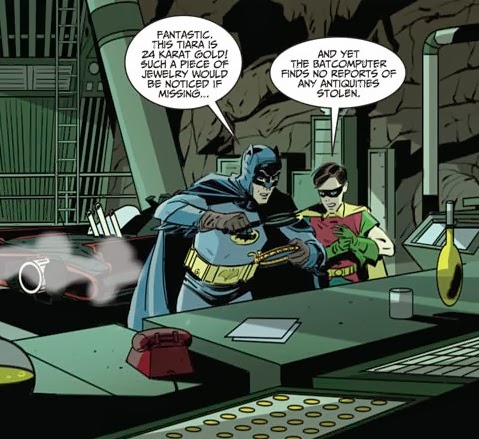 This issue features King Tut, perhaps the most successful of the made-for-TV villains, no doubt due to Victor Buono's over-the-top, and highly comedic performance.  Written by Jeff Parker, the story starts off very strong.  Tut apparently has legitimately acquired a fortune, and plans to take over Gotham by simply buying it.  Batman and Robin shadow Tut, and that's where things go a little south.  Tut has found a time barrier which allows him to go back in time to ancient Egypt, where he obtains gold by selling the Pharaoh some modern chocolate bars.  Batman and Robin, who have followed Tut into the past, observe this, as well as one of Tut's men drinking an ancient serum that will give him super powers. The Dynamic Duo race back through the time barrier, to head Tut and his gang off when they return to the present.  They capture Tut and his gang, but the one who drank the serum, Waylon, gets away and presumably will become the 1966 universe version of Croc.  I wasn't too keen on the whole time travel scenario, but since Parker did it, I find it more disappointing that he didn't work in a cameo of the Wizard Shazam, since Captain Marvel does exist in the 1966 universe, at least if you go by the Legends of the Superheroes TV specials (if you use those specials as a common denominator, it could be argued the live-action Filmation Shazam! TV series is part of the 1966 continuity... note to DC: think about a Batman-Captain Marvel crossover!).  I also noticed a continuity gaffe if this series takes place right after season 3.  In the second to last Tut episode, Tut had figured out Batman is Bruce Wayne, and in the final Tut episode, he confirmed it by accidentally tunneling into the Batcave. At the end of the episode, rocks fell on his head, reverting him back to Professor McElroy, and losing memory of Batman's secret identity.  But in this issue, Tut says he faked reverting back to McElroy, which means he should still know Batman is Bruce Wayne. The artwork is by Ruban Procopio, and is good, even if it has that same Mad Magazine quality that has persisted throughout most of this series.  He captures Victor Buono's likeness and mannerisms perfectly, while Parker seems to have toned down the character slightly from the TV show.

The second story features Shame, by the same creative team, but Procopio's art is in a totally different style, in what looks like painted watercolors.  The story is good, even if Parker tries a little too hard to rationalize Shame's Western motif.  It's fun to see Batman and Robin in cowboy hats, and on horses.  It's also nice to see Robin being the one to rescue Batman.

Overall this issue earns a B.
Posted by Shazamaholic at 12:13 PM No comments: