The Omega Underground website has posted some Billy Batson audition tapes. You can see them (potential script spoilers included) by clicking here.  Of a slight concern is that the script they are working from seems to have quite a bit of Curse of Shazam influence to it, with the reference to a council of wizards, and an allusion to the foster family.  But, it seems like the Billy Batson character is in line with the traditional version, and does not seem to be the jerk as seen in Curse. I am kind of hoping this is not the actual movie screenplay, but rather something tossed together culled from the rejected Bill Birch-Geoff Johns script just for the audition process, or if it is the current script, an early draft that has since been, or is the process of, being polished and tweaked.

UPDATE: Just a few hours after being posted, the videos were locked with passwords. A tape of Parker Young reading for the role of Captain Marvel was also briefly available before being shut down with a password, although Heroic Gateway was able to copy a part of it.

Posted by Shazamaholic at 11:06 AM No comments:

Just when it looked like Derek Theler was out of consideration for the role of Captain Marvel, due to his signing on to play Mr Immortal in the upcoming MCU TV series New Warriors, he has hinted at having an audition in a Snapchat post. 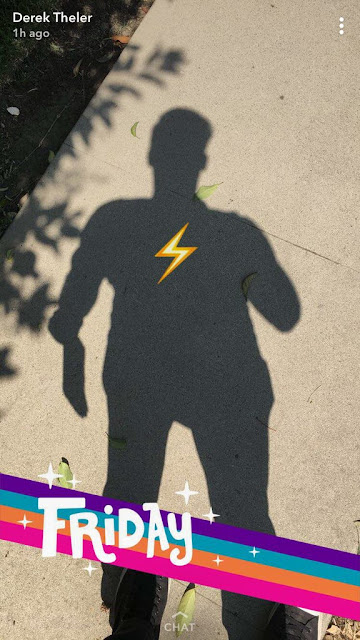 The lightning bolt symbol seems to indicate he may still be up for the role of Captain Marvel despite being signed on to a rival MCU production.  Perhaps he may be the first actor to simultaneously play characters in MCU and DCEU franchises.  Ironically, I believed that honor would most likely go to Dwayne Johnson, whom in addition to playing Black Adam, I was sure he would also sign on to play Namor the Sub-Mariner for the MCU.  But perhaps the failure of his Baywatch remake threw cold water on that idea.
Also of significance is Theler and David F. Sandberg have been liking each other's posts across Twitter, Snapchat, and Instagram, and Theler has begun to follow several key DCEU people.

And speaking of Sandberg, he has continued to post daily Instagram updates of the movie's progress in a way only he can.

Of note is classic Captain Marvel beating the crap out of New52 Shazam.  Related to this is that New Line released a synopsis and a Billy Batson casting call that both use the name "Captain Marvel" (although some sources later said these releases are fake). Also you can see an Elvis cartoon on the wall, hopefully a sign negotiations are going on to have Elvis recordings on the film's soundtrack.  Yes, things are getting interesting.
Posted by Shazamaholic at 9:15 PM 1 comment: