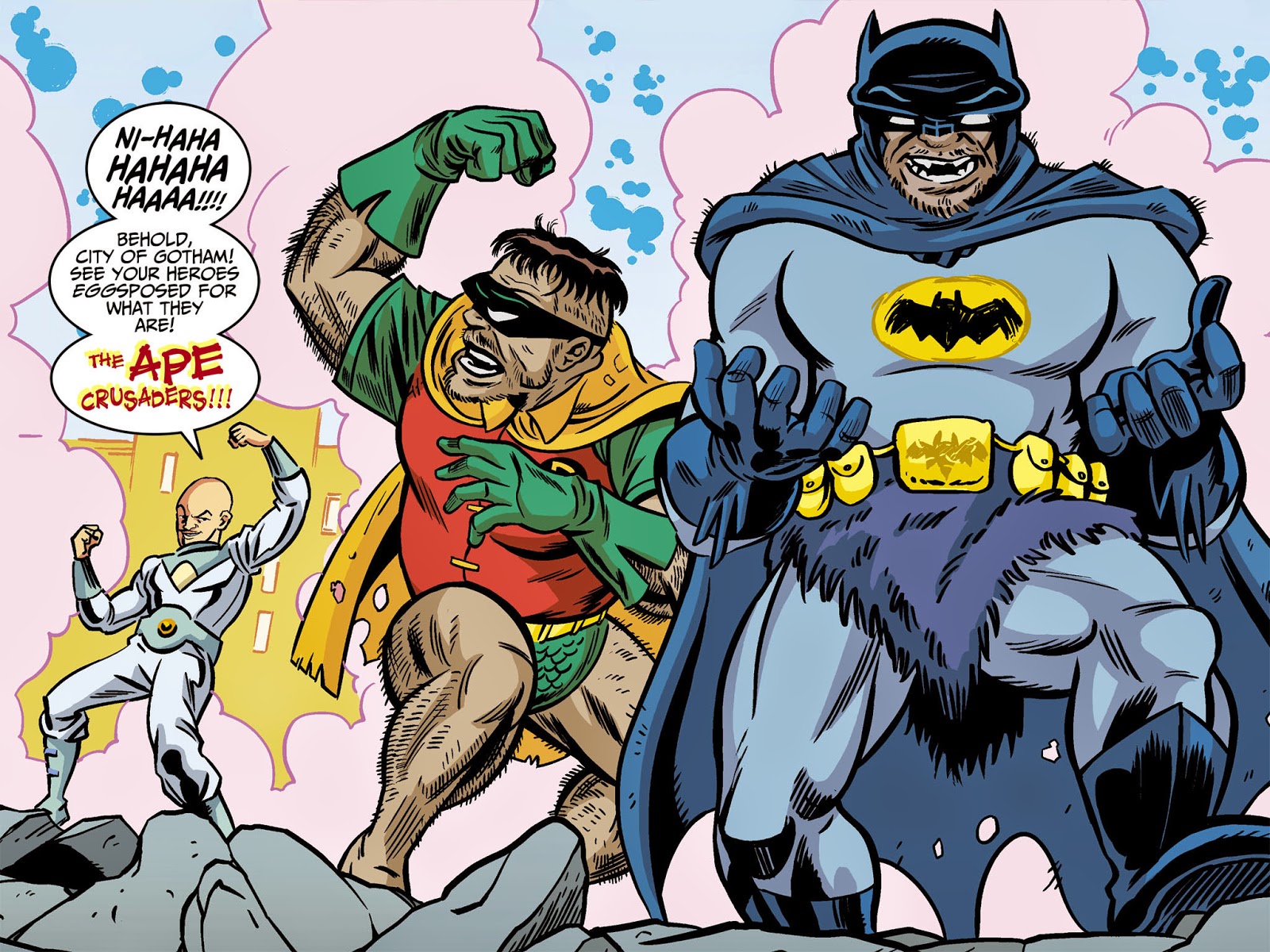 This issue features Egghead.  Jeff Parker's script creates what could have been an epic third season episode.  Egghead evolves himself to the point of having several futuristic mental powers.  He is able to will Batman and Robin to devolve back into cavemen.  He then takes the spoils of crimes committed by Mr Freeze and the Riddler.  With such ease, Egghead realises nothing is a challenge for him.  When the cavemen Batman and Robin, who aren't grunting brutes, but still have most of their mental faculties, figure out Egghead's lair, and break in, giving a performance of stereotypical mindless cavemen, Egghead realises he needs Batman as he was for mental challenge.  He wills the Dynamic Duo back to their normal state, and collapses from the strain.  Batman then quickly reverses Egghead evolution, retuning him to normal also. It kind of off beat to see anyone with superpowers in this setting, as the TV series was fairly grounded in reality in regards to such things. While Parker turned in a better script than usual, it's still third season quality.  I cannot stress enough this series needs to get away from the second and third season it has settled in, and get back to first season style storytelling.  Parker can't seem to do that. Again I emphasize that Andy Fish should be brought is as the writer for this series. This issues artwork is by Brent Schoonover, and he turns in a better assignment than some of the more recent artists.  Overall, this issue earns a C+.
Posted by Shazamaholic at 12:00 PM No comments:

Today, Warner Bros announced the release date for the Shazam! movie will be in 2019.
Posted by Shazamaholic at 6:48 PM No comments: 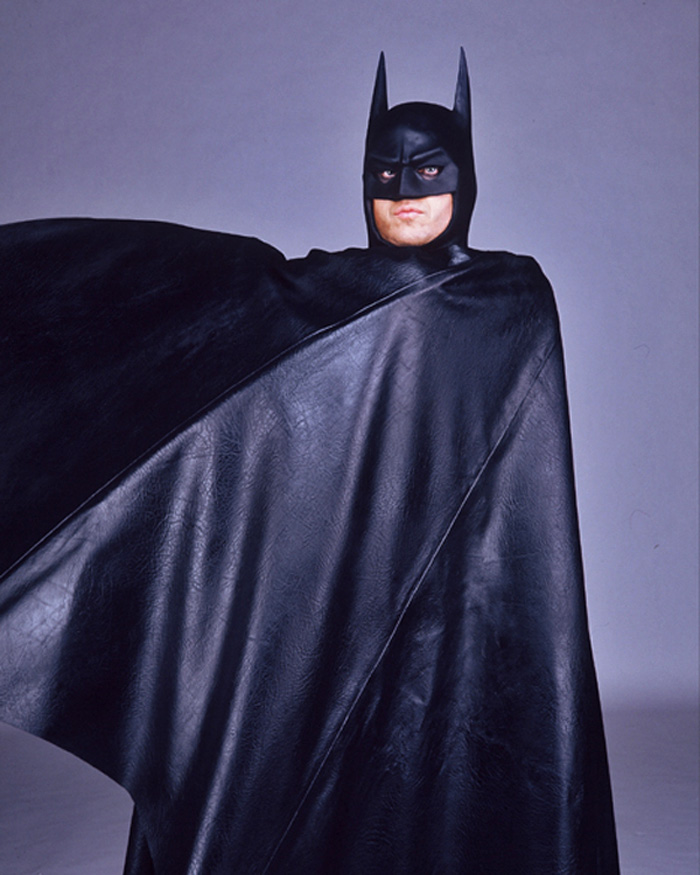 In an interview for Entertainment Weekly , Michael Keaton is asked if he would play Batman again. His response, "If it was Tim Burton directing? In a heartbeat."  He adds, “Tim, in movies, really invented the whole dark-superhero thing.  He started everything, and some of the guys who have done these movies since then don’t say that, and they’re wrong.”

Two years ago, I suggested Burton and Keaton reunite to make a third Batman movie, based upon Frank Miller's Dark Knight Returns altered somewhat to fit the existing continuity of Batman and Batman Returns. With Keaton's statement, perhaps such a project has a glimmer of hope. Sadly, due to Zack Snyder and Ben Affleck grasping all the remaining Dark Knight Returns material for Batman v Superman that wasn't already commandeered by Christopher Nolan in The Dark Knight Rises, such a Burton-Keaton project seems like all it will be is a glimmer of hope.  Unless, of course, Batman v Superman bombs at the box office like Amazing Spider-Man 2 and Kick Ass 2.

Keaton goes on to reminisce about bowing out after Burton was removed as director of the third movie by WB execs who didn't like the dark direction of Batman Returns, and brought in Joel Schumacher, “I hadn’t been stupid about it. I always knew it was a big machine with a big studio and corporation behind it. But the simple answer was, it wasn’t any good. I was nice. I said to them, ‘This is a really interesting character with a dual personality.’ I tried to make them understand. But when somebody says to you, ‘Does it have to be so dark?... I thought, are we talking about the same character? So finally I just said no.”

On his portrayal of Batman, he says, “Now I can say this, because for many reasons, I never allowed myself to say it at the time: It was never about Batman for me. It was always about Bruce Wayne. He’s funny! He’s screwed-up! The guy is the coolest motherf—-er in the world, and he’s messed-up!”

At this year's New York Comic Con, three Batmans have made appearances.  Adam West to promote the DVD release of the 1960s Batman TV series. George Clooney, who privately apologised to Adam West, and publicly to the fans, for Batman & Robin. And Michael Keaton, who went on to say he's still proud of his Batman movies, "Having played Batman and being very proud of playing Batman. I never back off that. The idea was bold, interesting, and cool when Tim made it.  When I took the original, I was unfamiliar with comic books. I wasn’t a comic book reader. [Reading the script he thought], this isn’t the way that I see the character but am glad to read it. Then I met Tim the next day, I’m saying [Batman] is this and this, and he was nodding in agreement. So I asked, are they going to make this? Tim said, 'I don’t know. Let’s find out'.”

Posted by Shazamaholic at 12:37 PM No comments: 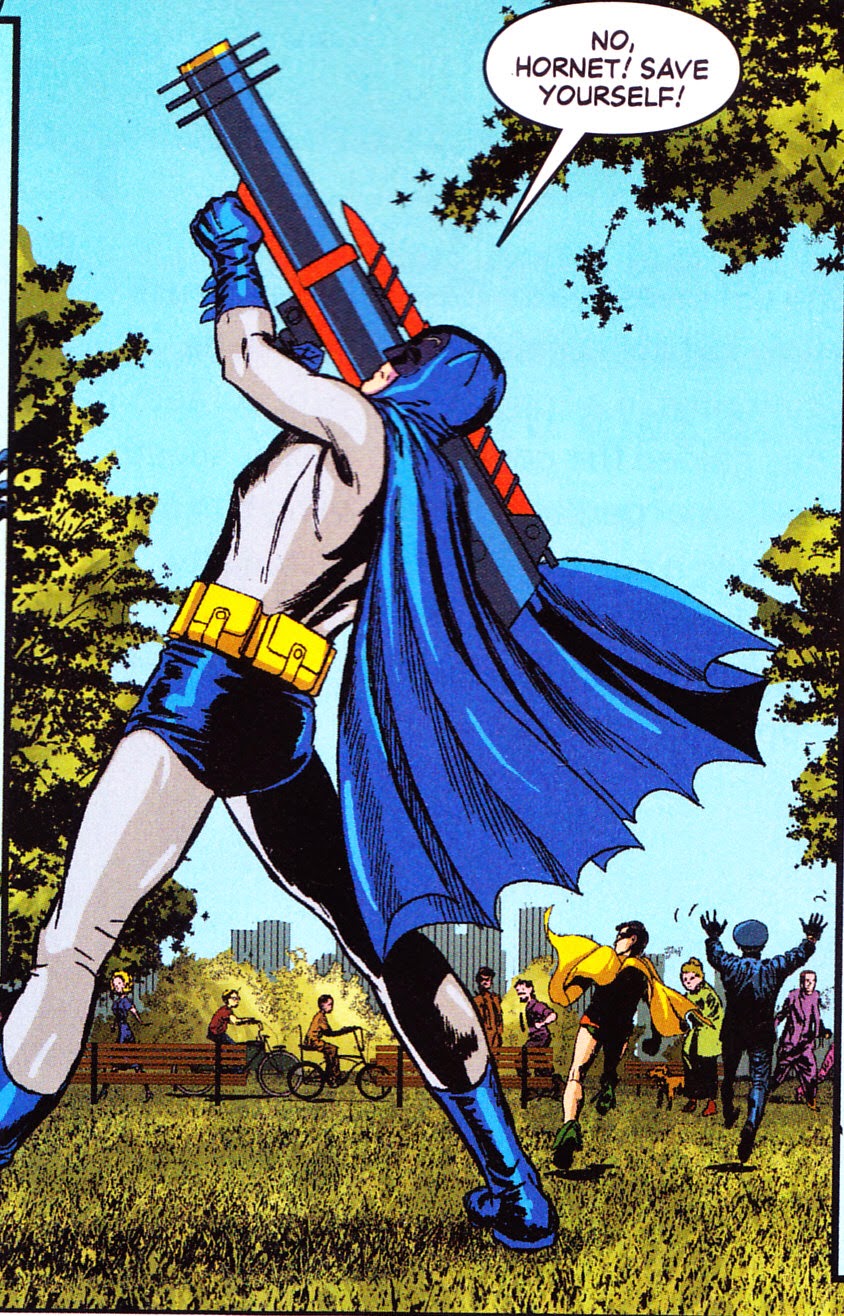 This issue starts with the Hornet and Kato deciding to change tactics on how they are working with the Dynamic Duo.  Cut to  Batman and Robin, in a death trap set by Joker and Gumm that is a little too similar to the one from The Zodiac Crimes episode, and the escape is likewise similar.  After which, the Duo are summoned to Gordon's office, where they are met by The Hornet, Kato, and District Attorney Scanlon (who knows the Hornet's secret identity), to set up a backstory so that Batman can work freely with the Hornet.  Meanwhile, Joker and Gumm, in Joker's jet plane hide out, drop a bomb on Gotham.  The four heroes, warned about it via Batmobile detect-a-scope, begin evacuating Gotham Central Park, where the bomb is targeted.  Batman and the Hornet stay in the park with the Batzooka in an attempt to shoot the bomb out of the sky.  Smith and Garman get deducted a point for the rehashed death trap, but they more than make up for it with the bombing of Gotham Park sequence which is the very first time since DC initiated the "Batman '66" franchise to come close to the tone and excitement of the first season episodes.  The first half of the book has the usual splendid art by Ty Templeton, but the second half is by Jon Bogdanove, who does a better job than most of the recent artists over in the main Batman '66 title.  And, of course, there is the Alex Ross masterpiece cover. This issue earns a B+.
Posted by Shazamaholic at 3:23 PM No comments: