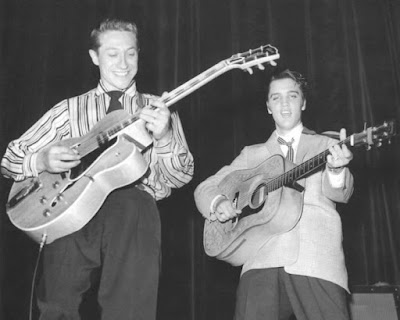 Winfield Scott Moore III was born Dec. 27, 1931, and began playing guitar at the age of 8.  After a stint in the Navy, and taking a gig in a Country Swing band called the Starlight Wranglers, Sun Records owner Sam Phillips assigned Scotty to evaluate a new kid named Elvis Presley.  Together with Starlight Wranglers' bassist Bill Black, the trio created history by recording "That's All Right".   Scotty remained an integral part of Elvis' band throughout the 50s and 60s, even appearing in some of Elvis' movies.  In Jailhouse Rock when Elvis is by the swimming pool singing "(You're so Square) Baby I Don't Care", you can see Scotty in the background playing guitar, with his sunglasses disappearing and reappearing between different camera angles, a continuity error Scotty got a big kick out of.

After Elvis' 1968 Comeback Special, Scotty retired from Elvis' band, and started a second career as a recording engineer. But he would also often dust off the Gibson to perform on various records and concerts for the rest of his life, often in conjunction with Elvis drummer DJ Fontana and the Jordanaires.  One of Scotty's last appearances was with DJ on the TV series Larry's Country Diner on RFD-TV in 2015.

Eternal rest grant unto him, O Lord, let perpetual light shine upon him, may he rest in peace. 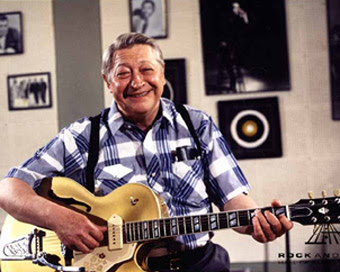 Posted by Shazamaholic at 10:36 AM No comments: