Captain Marvel makes it to DCnU 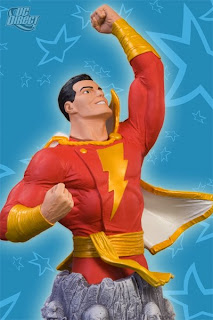 Announced at the NY Comic Con, Captain Marvel will make his debut in the DCnU Reboot Earth in a back-up series that will be published in Justice League beginning in issue #5, titled "The Curse of Shazam", written by Geoff Johns and drawn by Gary Frank.  The artist mentioned  their take will be very modern, and will feature a new costume.  He also kept referring to the character as "Shazam", leading to speculation the name "Captain Marvel" may be jettisoned. No more details have been announced, but it can be assumed it will relaunch Captain Marvel from the beginning in the new Reboot Earth continuity.

This means there will be two versions of Captain Marvel.  A version very close to the original version published by Fawcett Comics, located on Earth-5, and this new, relaunched/revamped version on the main DC earth.  Fans of the Jerry Ordway Power Of Shazam series may be snubbed, unless DC relocates that version to Earth-2 with the JSA, which seems highly unlikely at this point.

I am a little skeptical about Geoff Johns writing, as he has been overbooked as of late, and it is taking a toll on the quality of his work.  Plus in all his previous Shazam writings, he tends to keep Captain Marvel in the background while putting the spotlight on Black Adam.

Mr Johns, with all due respect, I hope you come across my blog and read it, and as one Michigander to another, please read my Captain Marvel Rebirth post and take it into consideration.  Please make Captain Marvel as great as he was in the Golden Age, as he still has the potential to be as successful to today's audience.  And, hey, why not put Fawcett City in southeastern Michigan? If the movie ever gets to the production phase, it would be great to have it filmed here!
Posted by Shazamaholic at 1:58 PM No comments:

Such an original idea for a movie!

Classify this in "What the - -?" column.  It has been announced comic book writer Mark Millar's Captain Marvel rip-off character, "Superior", will get a movie, to be directed by Matthew Vaughn.  Superior is about a young boy with MS who becomes a superhero through a magic wish.

Meanwhile, the development on the Captain Marvel movie seems to stalled to a complete stop, with director Peter Segal virtually invisible, and the much hyped script by Geoff Johns and Bill Birch seemingly DOA.  DC and Warner Brothers really need to get their act together.  Can't they see all the potential in a quality, properly done Shazam! movie? One of my first posts on this blog was a Shazam manifesto and its more relevant now than ever before.

At the very least, Captain Marvel is getting some exposure through his appearances in animated projects, such as Cartoon Network's Batman: The Brave & The Bold and Young Justice, and the Superman/Shazam! DVD short, even if the comic books and movies seemed to abandon him.
Posted by Shazamaholic at 7:49 PM No comments: