On Sunday, April 15, Micky Dolenz had a private memorial for Davy Jones at his home.

Peter Tork commented, Davy’s passing was hard. The rest of us, Micky, myself, and Mike Nesmith got together in California to attend a very private ceremony for Davy with some other friends and associates from the early days. At the end of the service 66 balloons were released, one for each year of Davy’s life. When some of the balloons got caught in the trees. Micky said, ”He’s not leaving while the lights are still on.”

Here are some pics from the event, taken by Nurit Wilde.

Posted by Shazamaholic at 7:24 PM No comments: 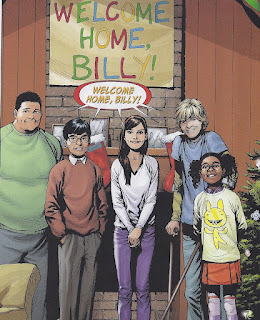 The second chapter of Curse of Shazam from JUSTICE LEAGUE  #8, once again reads like a teaser.  All that really happens is Billy meets his new foster family, which includes Mary and Freddy (who is now blond with a "Dead End Kids" personality).  Not surprisingly, Johns also includes his three new creations from Flashpoint : Eugene (the nerdy Asian), Pedro (the overweight Latino), and Darla (the Rudy Huxtable archetype).

Billy still acts like a jerk and makes Darla, the youngest of the kids, cry. Mary chews Billy out, and he seems to show a little remorse.  There is a glimpse of Tawny, a reference to Hoppy (Mary's pet rabbit that she, with Freddy's help, "liberated" from a pet store), and the all-too-brief teaser of a story ends with a foreboding lightning flash and thunder clap.

My thoughts: Much like chapter one, it's not bad, but nothing really special happens either.  Johns still seems to be setting the stage.  In the Golden Age, in 10 pages you could get an entire story with action, humor, thrills and a complete plot. I think the trade paperback collection of the entire story will be a more satisfying read. Gary Frank's artwork is very good, but like the tall muscular Sivana and the hooded cape, making Freddy blond is kind of a meaningless change (unless its some kind of reference to Elvis, who dyed his hair black once he became a movie star. Will Freddy likewise have black hair in his superpowered form?).

I would grade chapter 2 a C.  Johns better get things moving.
Posted by Shazamaholic at 11:56 AM 5 comments:

I only have one thing to say about it.

Actually, I'll let Jerry Howard, the real "Curly" say it for me. 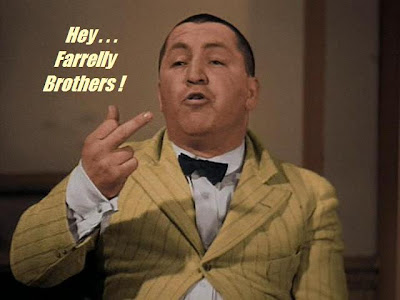 Link to article "Three Stooges Updated"
Posted by Shazamaholic at 11:24 AM 2 comments: