Reform of the Roman Missal

We have said goodbye to the inaccurate, paraphrased English translation of the Roman Missal of the Ordinary Form. This weekend the new and improved, and more accurate English translation was implemented. The words match the Latin, and are more poetic and inspirational.  The downside is that many parishes, including my own, are still using sugary, folk-pop style "Liturgical music".  Hopefully, in time, that will change as new composers become inspired, and parish music directors become less fearful of using Gregorian chant.

I attended the 5pm vigil mass at my parish. The new words were very beautiful and inspiring... but the overall anticipation for this event let me down a little. I was looking forward to saying the Confiteor, with the "mea culpa", but we skipped over it and went right to the Kyrie.  Although I don't blame him, the priest didn't seem well rehearsed with the new words and stammered quite a bit. And there was the Andrew Lloyd Webber hymnal that bogged the celebration down.  One nice thing was when the parish said "And with your spirit" the very first time, very loud and confident.

But overall, I hope in the weeks to come, the priests will get more used to the new words, and not stumble so much, and we may get better music... perhaps even chant.  And hopefully we will get to say the Confiteor soon.

There are critics on the left who say the older 1970 paraphrase translation is more understandable, and there are critics on the right who say it doesn't matter how they improve the translation because only the Extraordinary Form of the Mass is pleasing to God.  While I am fond of the Extraordinary Form (the 1962 Missal of Blessed John XXIII), I don't know if simply going back to it exclusively is something that would be accepted by the ordinary Catholic, unless it is gradually done over a generation.  Even I don't think I could attend the Extraordinary Form exclusively, due to the somewhat confusing nature of it, not so much  due to the Latin, but because much of it spoken by the priest in a low voice, having the people sit there in silence, reading the English translation missalettes on their own. The plan of Pope Benedict XVI seems to be to gradually merge the Novus Ordo of Paul VI and the 1962 Missal of Blessed John XXIII together. The new English translation of the Missal of Paul VI seems to be step 1. Some years later, step 2 may be a hybrid Mass, perhaps based on the 1965 Missal. After a decade or so of that, then it would be feasible to think the 1962 Missal could be restored as the only form, slightly revised to include more vernacular, less "sotto voce", and to fit the newer liturgical calendar and three year cycle of readings.

But for now, I am looking forward to the new English translation of the Ordinary Form, and excited to see the celebration of it become better and more fluid, and just maybe, priests may start saying the Eucharistic Prayer ad orientem.
Posted by Shazamaholic at 8:33 PM 1 comment:

We are now a few issues into the company wide reboot of DC Comics.  Here are my thoughts of it so far. First, let me say I have not read (or plan to read) all 52 titles.  I just have no interest in some of the fringe series they are publishing, like VooDoo or Demon Knights.  For what its worth, I picked up several of the first issues, but by issue 2, I cut it down to a handful. 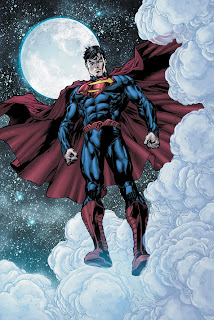 First, the Superman franchise. I actually kind of like what they are doing. They've gone back to the original 1938 stories.  Like those original stories, Superman is much less powerful, but the longer he is exposed to Earth's yellow sun, over time, the more powerful he grows. No more is Superman the classic big blue boyscout we've all come to take for granted.  This Superman is... well, kind of like Batman with superpowers.  He's tough, a brooding loner, and isn't above bending the law or threatening crooks.  The new Clark Kent is... well, kind of like Peter Parker. He's a nerd, a brooding loner, and an outcast, but he uses his status as a reporter to fight for the underdog, kind of like those old time crusading reporters in old black and white film noir movies.  As with the original comics, he starts out as a reporter for the Daily Star under editor George Taylor, while Lois Lane and Jimmy Olsen work at the Daily Planet for Perry White. Soon, Clark lands a job at the Planet, while Lois gets promoted to being a TV news producer at GBS. Clark's only friend seems to be Jimmy Olsen, who does double duty as both a still photographer for the Planet and a video photographer for GBS (both are owned by Morgan Edge's Galaxy Communications).  And forget about Lois and Clark. In this new continuity, there is no relationship or even chemistry... at least not yet. Luthor's role, at this point, seems to be as a scientist/inventor who works with the U.S. military.

Perhaps the worst part of this reboot is the costume. His first costume is an S-emblem t-shirt, with blue jeans, work boots, and a baby blanket cape.  Yeah.  Kind of dumb.  He soon replaces it with a Kryptonian suit that has a lot of piping and armor, with a turtle neck, but no trunks.  The classic costume is still much better with out a doubt.

But this new take on Superman comes at a price for Batman fans.  Batman is mellowed out in the new continuity.  With Superman as the dark and brooding hero, Batman is made to be more of a leader and uniter.  In Justice League, it is Batman who plays the peace maker between the other heroes, a role the old continuity Superman played, while Superman acts more like Batman used to in the old continuity.

The Batman franchise fares much worse. Unlike most of the other characters, the decision was made (and, according to some reports, at the last minute) not to reboot Batman from the beginning. But the Batman franchise was one that needed rebooting as much as Superman. So, there still is an expanded Batman family, with a number of redundant characters.  There is still an overloaded history, and even the most recent "Batman Inc.", where Bruce Wayne actually franchises the concept of Batman to other countries.  The original and legendary Robin, Dick Grayson, is still saddled with being Nightwing, a bargain basement version of Batman based on a second rate Silver Age Superman character. While Superman was simplified and went back to his roots, Batman remains a muddled incoherent mess.  It would have been so nice to go back to the classic Bruce Wayne and Dick Grayson Batman and Robin team, back to the moody, nocturnal roots, and revive a classic logo.

Wonder Woman appears to be on track to become DC's version of Thor. In her traditional origin, she is created when the Queen of Paradise Island molds a baby out of clay, and brings it to life. In the new reboot, Wonder Woman is the daughter of Zeus.  It is unclear if this reboot will be better or worse, because Wonder Woman is a character that, while iconic, is very hard to make interesting in any long term fashion.  It appears Green Lantern's personality has been changed to reflect Ryan Reynold's performance in the recent movie dud.

The new version of Captain Marvel will debut in a couple months in Justice League #5.  You can bet I will have a lot of opinions and commentary on that. Stay tuned.
Posted by Shazamaholic at 5:05 PM No comments:

As I reported previously, Popeye will be getting a new comic book series.  Now, the Hollywood Reporter has announced the developing CGI animated Popeye movie for Sony will have a script written by Jay Scherick and David Ronn, who wrote the script for this year's Smurfs movie.

Of the two projects, I am more excited for the comic book series. Not to be cynical, but I think this CGI movie is a disaster waiting to happen.  A CGI animated film was tried a few years ago, albeit direct to DVD, and it wasn't very good. The Popeye characters did not translate well to three-dimensional style CGI animation.  It also didn't help that the script was rather weak, retelling for the countless time of how Popeye searched for and found his long lost Pappy.

How did Sony get the rights to make a Popeye film? Paramount is the studio that has the longest relationship with the Popeye characters and owns the publishing to I'm Popeye The Sailorman.

If you ask me, a new Popeye animated film should be traditional hand drawn animation, done in the Max Fleischer style, with his Stereoptical Process.  The script should be a blend of E.C Segar's adventure storytelling and Fleischer's comedy and music.  If Scherick and Ronn plan on having Popeye dancing to modern pop music, making numerous pop culture quips and, and is more concerned with product placements than plot, then I think this movie may already be DOA.  But what do I know?  I'm just a fan.

Hopefully, Ted Adams and IDW will get Popeye right in the comic books. He tweeted that the creative team will be announced soon, and fans of the Segar Popeye will be happy.
Posted by Shazamaholic at 11:35 AM No comments: