This issue has two stories.  First is an introduction to the Harley Quinn character into the '66 Universe, written by Jeff Parker with art by Lukas Ketner.  Since the beginning of this series, I have not been a fan of incorporating aspects of the generic DC Batman into this universe, despite it most likely being a corporate mandate from the powers that be at the DC offices.  Harley Quinn, or Harlequin, as she's called in this continuity, is perhaps one of the worst of the lot. I know Harley is reaching new levels of popularity thanks to Margot Robbie portraying her in the upcoming Suicide Squad movie, but the character is just so unnecessary in the '66 Universe.  Parker does his best to make this version of Harley as different as he can (like giving her a Roller Derby motif) while still being essentially the same character, but it ultimately falls flat. The artwork is average with nothing really standing out.  At the end of the story, Harlequin asks if she has achieved Catwoman level or even Egghead level.  The answer for me is Lord Marmaduke Ffog level. This story earns a D. 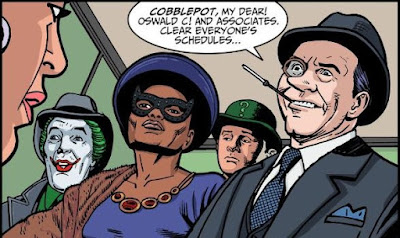 The second story is simultaneously better and more frustrating. Written by Gabe Soria, the premise is brilliant. A Mad Med parody where the United Underworld (Penguin, Riddler, Catwoman and Joker) go to an ad agency, where Barbabra Gordon just happens to have started a temporary job, to re-brand themselves. Brilliant premise, but a flawed execution. First, Batman and Robin do not appear. Technically, Batgirl doesn't even appear except for a brief daydream sequence. The fearsome foursome are portrayed as being virtually harmless and inept, being outwitted at every turn. This story could have and should have been so much better. The art by Ty Templeton is is excellent, as he's one of the best artists to work on this series.  However, even though the feature film's United Underworld is used, Templeton used Eartha Kitt's interpretation of Catwoman instead of Lee Meriwether's, whose likeness he did use in a one-panel flashback to the feature film in Batman '66 Meets the Green Hornet. The premise and art gets an A while the execution gets a C, averaging out to a B-. That averages out the entire issue as a C.
Posted by Shazamaholic at 12:56 PM No comments: