Batman '66 meets the Man from UNCLE.  This is a great concept. The first issue of this miniseries, written by Jeff Parker, sets things up nicely. In a unique narrative, Parker has Batman and Robin and UNCLE agents Napoleon Solo and Illya Kuryakin in separate story lines.  Needless to say they will cross paths soon, but its nice to start the story with two separate story lines than to jump right into a team up.  Batman and Robin chase an escaped Penguin, a great pick for this miniseries, seeing that UNCLE's adversary is THRUSH.  Meanwhile, the UNCLE agents are after a new THRUSH agent, Olga Queen of the Cossacks.  The inclusion of this weak third season villain is the low point of the issue.  There is a nice nod when Solo introduces himself using the alias "Ross Webster", the Morgan Edge-like character actor Robert Vaughn played in Superman III.  The art by David Hahn is acceptable, but at times misses the mark on the likenesses of Vaughn and David McCallum. The format of the story is closer to the Man from UNCLE TV series, which itself partially inspired the creation of the Batman TV series. In return, at the height of "Batmania", UNCLE took on a campier Batman tone. Since Warner Brothers owns the UNCLE franchise, via their buyout of Ted Turner who got the rights from MGM when they were selling their back catalog due to bankruptcy, I always wondered why WB didn't hand the property to DC to incorporate into their Universe. Indeed, Marvel's SHIELD was created as a rip off of UNCLE, so it would seem natural for DC to incorporate the original into it's universe.  It certainly would make more sense than its own lesser-grade spy agencies like Spyral or Argus.  All in all, this is a good start to what should be a great miniseries. The first issue earns a B.
Posted by Shazamaholic at 1:44 PM 3 comments: 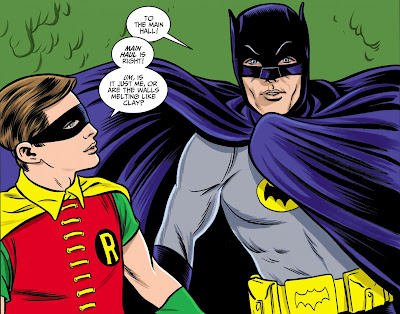 The old phrase "save the best for last" rings true with Batman '66. This final issue is by far the best of the series. Written by Lee Allred and drawn by Mike Allred, everything about this issue is perfect. In many ways, it reads like it should have been the first issue, not the last. In a pseudo-sequel to the 1966 feature film, the Allreds very cleverly reconstruct, or maybe deconstruct, the TV series' opening credits sequence.  Penguin, Joker and Catwoman have teamed up, taking over a vacated movie studio, to teach all of Gotham's arch-criminals to perfect their craft. Noticeably missing is the Riddler, essentially blackballed for his compulsion to leave clues for Batman. Again, this would have fit as the premiere issue so much better, explaining why the Riddler was all but absent from this comic book series. 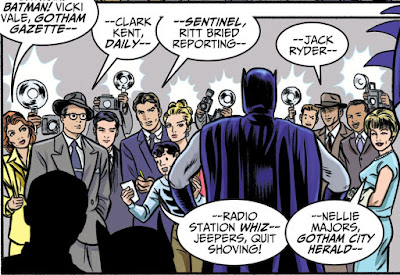 A highlight is the "window cameo", featuring none other but the 1950s TV versions of Perry White, Jimmy Olson, and Lois Lane. The George Reeves version of Clark Kent also appears at the end of the story along with several other reporters, including Vicki Vale, and... Holy Moley, a certain boy radio reporter from station WHIZ!  Since the on going Batman '66 series is going to be replaced with various miniseries (the first of which, Batman '66 Meets The Man From UNCLE, will have issue #1 published next week), hopefully these cameos will be the foundation for a Batman '66 Meets Superman '52 miniseries, and a Batman '66 Meets Shazam '74 miniseries, the latter as I speculated before, has precedent in the 1979 Legends Of The Superheroes TV specials. Kudos to the Allreds for producing a perfect issue of Batman '66. This issue earns a well deserved A+.
Posted by Shazamaholic at 9:58 AM No comments: