David F. Sandberg has humorously hinted on his Instagram page he has officially began working on World's Mightiest Mortal.


And then added an update.


Casting announcements may be imminent. So far, all we know is Dwayne Johnson's Black Adam will not appear (except for a possible cameo), Sandberg has shown signs he is more influenced by the classic version of Captain Marvel rather than the Curse of Shazam reboot, and has said he will cast two actors as Billy Batson and Captain Marvel, instead of casting only one, and using CGI trickery to create the other.

Posted by Shazamaholic at 11:06 AM No comments:

David F. Sandberg, the director of World's Mightiest Mortal gave fandom a treat by leaking a page of the screenplay. 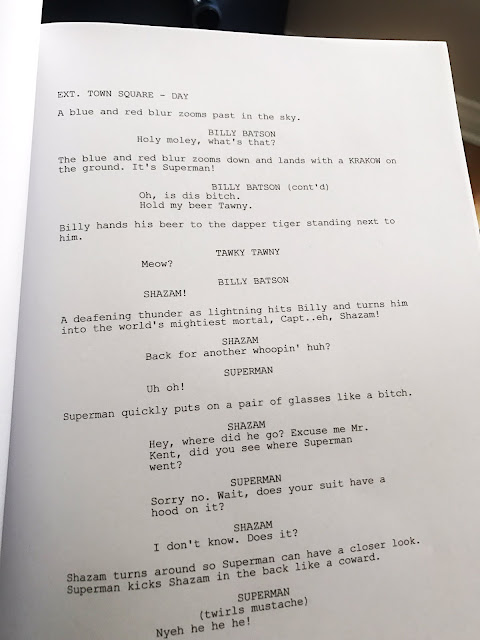 Obviously it is a joke, but if you read between the lines, it can be interpreted as a symbolic "middle finger" to both the unpopular Curse of Shazam reboot of Captain Marvel, and to the nagging calls by certain fans to include Superman in the movie as Billy Batson's mentor. I really think we got the right guy for this movie.  I'm feeling very optimistic.
Posted by Shazamaholic at 10:02 PM No comments: