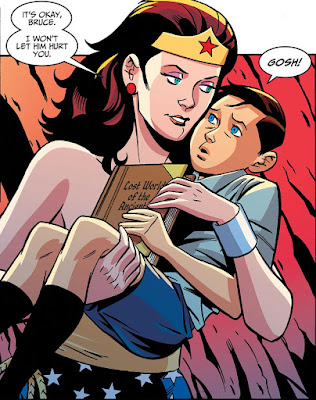 This issue picks up where the last left off, back in the 1940s, with Ra's trying to strong-arm the "Lost World of the Ancients" books from young Bruce. Ra's is able to get one of the books, as Wonder Woman and Talia search for Bruce and Ra's. Ra's meets up with Wonder Woman, and she fights some of his goons.  Then she flies off to find Bruce.  Wait... Wonder Woman didn't fly in the TV series, unless it was in the invisible plane. Ra's and Talia take off, and a Nazi captures Bruce.  He breaks free and falls into a cave, in what amounts to just a remake of Christopher Nolan's Batman Begins. Wonder Woman fights off the Nazis holding the Waynes hostage, as several bats from the cave fly into the house and "tell" Wonder Woman where Bruce is.  She flies off to get him.  It's revealed the book Catwoman III stole for Talia contains the location to Paradise Island. Back in the present (or 1966... or more precisely 1968, since this whole franchise seems to follow the 3rd season episodes) Batman and Robin prepare to head to Paradise Island to warn Wonder Woman.  A slightly above average script by Jeff Parker and Marc Andreyko, where the Parker trademark of forcing generic, modern DC aspects into the 1966 Universe include the mentioned Batman Begins riff, and Wonder Woman having the ability to fly, predictably mar what could have been a better story. David Hahn's art is also a bit on the generic side in regards to actor likenesses, but otherwise well done. This issue earns a B-.
Posted by Shazamaholic at 11:00 AM No comments:

Do we have a director... and for which film? 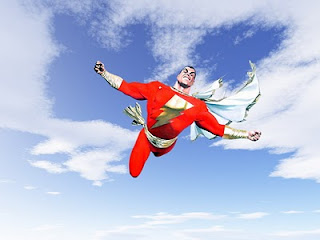 Collider is reporting that David F. Sandberg is in talks with New Line and Seven Bucks to helm one of the Shazam movies.  It is unclear if he will direct Black Adam or World's Mightiest Mortal. Considering Brad Peyton was a lock for Black Adam, it is very likely Sandberg may direct the Captain Marvel movie.  If so, it seems probable World's Mightiest Mortal and Black Adam will be released a few months apart.  On the other hand, Sandberg seems more natural for the Black Adam film, so maybe he's edging Peyton out in the negotiations. Once verified, we can expect casting announcements to start coming at a fast pace.  This is what we've been waiting for... unless of course the project derailed again, which considering its history, is not out of the question.
Posted by Shazamaholic at 10:46 AM No comments: