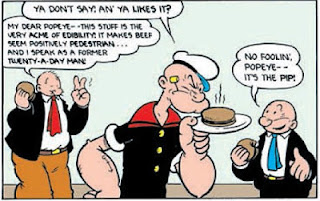 This time I have two Popeye issues to review.  First up, POPEYE #9.  This issue features artwork by Ken Wheaton, and is some of the finest artwork to appear in the series so far. Wheaton's art is fluid, not stiff like what has become the unofficial IDW house style for Popeye.  He also shows a slight influence of the Max Fleischer character designs, which is very welcome.  The story, written by regular writer Roger Langridge, is an adventure that deals with a mysterious but delicious and nutritious vegetation based meat substitute, named Schtuff.  Alice the Goon seems to find something troubling about it, which leads Popeye to investigate, discovering Bluto, assisted by a hypnotist named Kazam, has developed the recipe by mixing a mushroom native to Goon Island with the tears of hundreds of hypnotized Goons.  As typical of Langridge, he does a good job spinning an adventure, but he's a little light on the humor.  There is also a Sappo back up feature that is very enjoyable.  The artwork on this issue gets an A, but the writing a C+, for a total grade of a B.

Next is MARS ATTACKS POPEYE, a one-shot crossover.  The artwork is by Terry Beatty, and shows some influence of Bill Zaboly, and Barbecue For Two, the pilot episode of the 1960s TV cartoons.  The story, by Martin Powell, is fairly standard stuff considering this is a crossover of such two unlikely continuities.  The Sea Hag teams up with the martians to invade earth, and its up to Popeye to stop it.  A little too much sci-fi mixed in with Popeye for my taste, but it accomplishes its goal.  It earns a C.
Posted by Shazamaholic at 5:28 PM No comments: 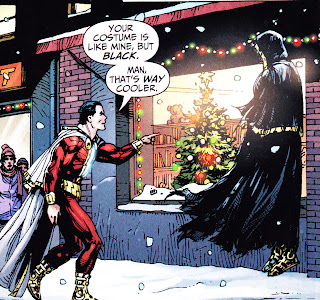 Chapter 9 of Curse Of Shazam in JUSTICE LEAGUE #16, begins in New Jersey, where Sivana and Sloth locate the next Deadly Sin imprisoned in human form, Pride.  Then we cut back to Capt... er, Shazam and Black Adam where we left off last issue.  Once again we have a "hit yourself in the head" bad moment, when Capt... er, Shazam exclaims how much cooler Black Adam's costume is than his own. **groan**  Adam then proceeds to hand Capt... er, Shazam a big can of whup-ass. Bleeding and terrified, Capt... er, Shazam flees from Adam into a crowd and transforms back into Billy (who has the same facial cuts and bleeding as Capt... er, Shazam had), and runs off to hide and cower behind a dumpster as Adam screams how he will find him sooner or later. 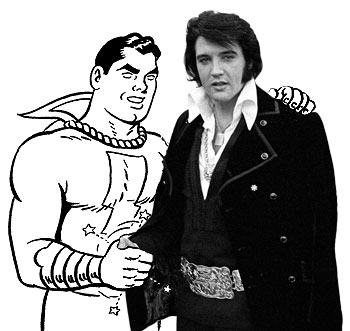 Today is the anniversary of Elvis Presley's birthday. Elvis was not only the King of Rock and Roll, but as a kid, he was a comic book fan, with Captain Marvel Jr. being his favorite.  I can only imagine Elvis, as a 6 year old kid, being thrilled by the Adventures of Captain Marvel movie serial.  Or as a reclusive superstar in his late 30s, getting up early (or more likely, staying up late) to catch the Shazam! TV series on Saturday mornings.  I can only imagine what he would have thought of the current Curse of Shazam reboot.  Happy Birthday, Elvis. 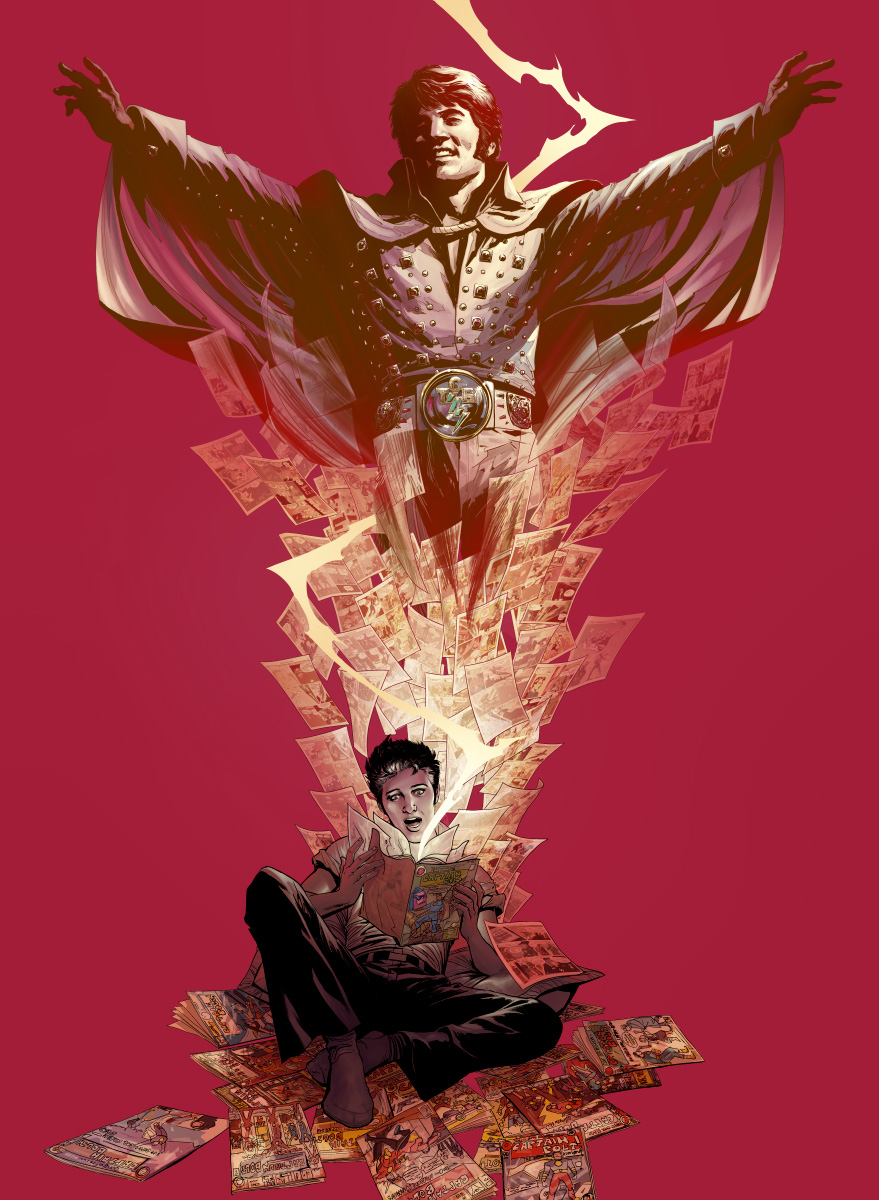 Posted by Shazamaholic at 9:35 PM No comments: 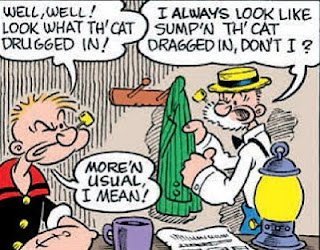 This issue, as usual, is written by Roger Langridge.  The art this time is by Vince Musacchia, who renders a good and polished look.  I like that colorist Luke McDonnell correctly colors Popeye's hair red, a fact often overlooked.  Vince's art is very much inspired by Segar, but a bit more fluid.  The story starts as a romantic comedy with Pappy as the unlikely leading man.  This portion has the most humor, and is very enjoyable.  The story then segues into a treasure hunt, as the lady Pappy has been courting turns out to be the Sea Hag, who is wants the treasure map tattooed on Pappy's back. They all race to get tho the buried treasure first, which contains a magical bracelet.  Sea Hag gets the bracelet, but Popeye gets instructions with a key to a safe deposit box where the other bracelet is kept.  As they all converge on the bank, Olive gets the first bracelet away from the Sea Hag, and Popeye throws both bracelets into the ocean.  Popeye also finds that Pappy, despite his crust exterior, kept a photo album in the safety deposit box of Popeye's baby pictures.

An enjoyable story with very good artwork, this issue earns a B.
Posted by Shazamaholic at 9:37 AM No comments: