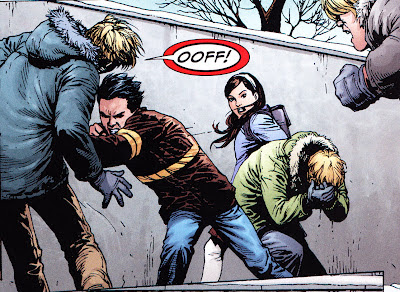 Part 3 of Curse Of Shazam in JUSTICE LEAGUE #9, begins with an increasingly annoying Darla screaming "hooray", because Billy wakes up and she can eat breakfast.  Then its off to Billy's first day at Fawcett High (I guess that's a way to keep the name "Fawcett" in there since the story is set in Philadelphia).  We get see see just how much of a hustler Freddy is, as he explains to Billy he can get test scores, doctor's notes, and hall passes, offering Billy a family discount.  Billy snaps that they are not family.  Freddy says friends, then.  Billy snaps he doesn't need friends.  Cut to end of school.  The kids are walking home as moody brooder Billy goes off on his own, not wanting to walk with the other five kids.  Then two rich bullies named the Bryer Brothers confront Eugene for getting an A in class and blowing the curve.  Freddy steps in and insults them.  One brother pushes Freddy against the wall, warning him Freddy's crutches won't stop him from messing Freddy up, while the other brother twists Mary's arm, telling her to cry.  Suddenly, out of nowhere, Billy punches out both bullies.  He warns his foster-siblings it was no big deal, he just doesn't like bullies, but then a teacher busts Billy for fighting. Cut to the Principal's office where she unloads on Mr Vasquez she has seen Billy's horrible record. Then the brothers' father, Mr Bryer (who looks way too much like Lionel Luther from the Smallville TV series) enters and demands Billy doesn't fight his boys again.  On the way out, Billy confronts Bryer, threatening his sons if they continue to bully other kids.  Mr Bryer then physically threatens Billy, but Mr Vasquez breaks it up. The two adults exchange heated words and Billy and Vasquez head home.  Cut to Baghdad. Sivana is on an expedition where he finds the tomb of Black Adam.  He tries to open it, but lightning strikes Sivana, leaving him with a Harry Potter style scar over his right eye.  Sivana exclaims he can see magic.

My thoughts:  a nice chapter. We get to see more of Freddy's "Dead End Kids" style antics. There is evolution to Billy's character. Even though he is a brooding jerk, he won't hesitate to step in and fight someone who is bullying other kids. The introduction of the Bryer Bunch leads to think they will be adversaries of some kind to the Vasquez foster clan, with Mr Bryer perhaps becoming a villain at some point.  Johns needs to watch Darla's personality, as she is starting to remind me of Special Ed from Crank Yankers.  The postscript with Sivana hopefully signals the plot will now kick into high gear, for if this is to be a 12 issue arc, we really need to see Billy become Captain... er, Shazam before the half way mark.  I give chapter 3 a B.
Posted by Shazamaholic at 11:51 AM

Agreed! This issue had more elements than the 2 prior issues. This one showed the true demeanour of Billy, which should begin to quash the idea of his petulant ways. That aggression he displays is far more believable in a child who grew up in several group home/ foster-home scenarios. At least this issue proved he has an honour system in his morals.
Also, I noticed that Johns has installed a rival family,The Wealthy Bryers, to intentionally address the difference in what real family is supposed to be (You don't have to have the same blood to be family).
Aside. from that, I'm getting the sneaky suspicion that they might make Sivana himself, the conduit/vessel for Black Adam!! I hope I'm wrong, but either way,
Johns is doing a much better job than I had originally thought!!!

Hmm... making Sivana the DCnU Black Adam? That would be a radical change. It will be interesting to see if you guess that one right, Chris!

I have never liked anything that Geoff Johns has written. But I am surprised by how much I am enjoying this series so far.

I'm enjoying what I've been reading so far. I wonder if Mr. Bryer is the one who funded Sivanna's expedition?