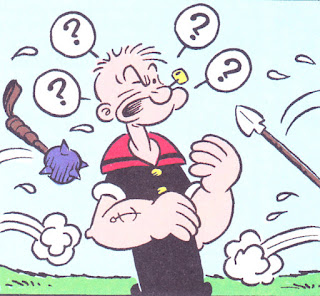 The fourth issue of POPEYE takes a step back from issue 3 (the best issue to date).  First, the cover.  In issue 3, a preview of the cover was published. It was by John Byrne, and when I saw it, I thought he really got Popeye perfect, in the blend of Segar and Fleischer I feel should be the standard.  But issue 4 doesn't have that cover.  The standard cover is a simple Bruce Ozella job, and the variant is a Hanna-Barbera looking Popeye by Seymour Chwast.

Roger Langridge's script, a political drama featuring King Blozo, as usual, is a blend of Segar and Sagendorf.  Once again, it is heavy on action and adventure, but light on humor.  Once again, I need to stress he needs to pick up on the humor, work in some Fleischer style laughs. The issue also has an overabundance of dialogue, taking up over half of the space in many panels.  The artwork by Vince Muscacchia is slick and fluid, and based on early Bud Sagendorf, rather than Segar.

There is a back up feature of Sappo and OG Watasnozzle by Langridge and Tom Neely that is well done and has more humor than the Popeye story.  This issue gets a C+.

Also, IDW has published a reprint of Dell's POPEYE #1 from 1948. They plan to make this an ongoing series, so we will have two Popeye comics a month, new and reprints.
Posted by Shazamaholic at 11:59 AM