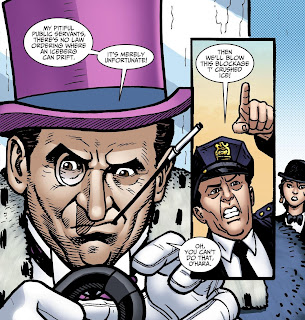 The second issue of this retro series continues the adventure and fun begun in the first issue.  Ty Templeton's art in the issue's first two stories is even better than Jonathan Case's artwork in issue 1.  The only critique is Templeton gives Batman a pot-belly in some panels (Adam West did have a bit of a paunch, but that's something that should be overlooked in the artwork).  The two-parter features a team up of Penguin and Mr Freeze.  A little dilemma here, as George Sanders' portrayal was the definitive version, but Templeton went with the look of Otto Preminger, which seems to mesh better with the current DC.  Thankfully Freeze isn't exclaiming "Wild!" every panel.  In fact it seems writer Jeff Parker is mashing up the TV series continuity with bits and pieces of DC Comics continuity.  All in all, the Penguin-Mr Freeze two-parter was excellent.  The third story features Chandell (played by Liberace in the series' highest rated episodes) and The Siren (third season villain played by Joan Collins).  Neither of the actors' likenesses were used, due to lack of permission.  This story also features Kathy Kane as Bruce's date, and Robin sits this one out. Parker's writing for this one is weaker, and seems more like a third season type mess.  Case is back on art, and while he does a good Siren, his art overall is weaker than Templeton's.  The final panel features one-shot villain The Sandman, and third season disaster Minerva (played by Zsa Zsa Gabor -whose likeness is used by Case- in the series' finale, and one of its weakest episodes)  hinting at a bigger plot line that may stretch over several issues.  This story just wasn't as good, being too close to the type of junk that was aired on the third season.  The creative team needs to stick closer to the first season episodes when crafting this book.  The third story knocks this issue's grade to a B+.
Posted by Shazamaholic at 5:07 PM