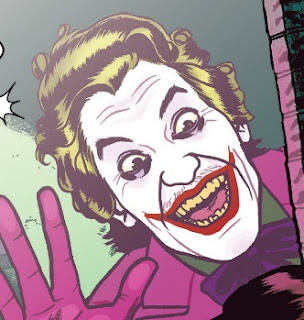 The third issue of Batman '66 brings back the Joker.  In the lead story, writer Jeff Parker continues to mash up generic DC continuity with the continuity of the TV series, but this time around, it has more negative effects.  A different kind of take is used for the Red Hood, which involves Professer Overbeck, a character from the second season Mad Hatter episode (the one with the infamous pink cowl), but now he is the head of Arkham Asylum.  Harley Quinn is introduced, in her pre-crazy form as Dr Quinn (looking a bit like Sandy Duncan).  The Joker is established as insane (as are several other villains residing at Arkham), and is referred to as "Patient J".  On the TV show,  Romero had two different personalities for the Joker. In the first two stories, he was a joking, yet cunning, criminal mastermind, with just a faint hint of insanity (see the end of Batman Is Riled where a captured Joker laughs with a demented look in his eyes.... or He Meets His Match, The Grisly Ghoul where he attempts to murder his own moll, teenage Susie).  But by the third story, Romero's portrayal was reworked to make him more of a childish, brat like character, which it remained for the rest of the series run.  But in Batman '66 #3, we get essentially a generic crazy DC Joker who happens to look like Romero.  I think this is all needless, and seems to undermine the purpose of Batman '66 by making it more of a typical "Johnny DC" version of Batman.  As a result, I did not enjoy this issue as much.  The art, by Joe Quinones, was excellent, and he got Cesar Romero's Joker spot on, even with the hint of a mustache.  The coloring of Batman's costume was unique, as Maris Wicks gave it the purple hue of the TV show.

The shorter second story featuring Egghead, also written by Parker, was, like last issue's short Siren story: too much like a bad third season episode.  The art, by Sandy Jarrell, had a little Mad Magazine parody flavor to it.  Egghead looked nothing like Vincent Price (perhaps due to DC not getting the rights to use his likeness), and at the end we see Warden Crichton (played by David Lewis on the series), who has transformed into a black woman! Holy Political Correctness!  By issue 3, what started out as a great series, has suddenly sunk to a low.  I think DC may need to bring in some new writers rather than rely on Parker to do the entire series. I'd like to see bronze age writers like Steve Englehart, Mike W. Barr, and Gerry Conway, contribute some scripts. They need to stop trying to morph the TV show into standard DC continuity (and let me reiterate, I unquestionably do not want to see Dick Grayson become Nightwing), and need to capture the spirit, the style, and the storytelling of the best first season episodes.  Issue 3 earns a C.
Posted by Shazamaholic at 5:28 PM

It's a shame your grade of this series is going down as each consecutive issue comes out. I was looking forward to picking up the TPB of this series, but if it's not gonna be very good, I may just stick with ME-TV reruns.

They should keep DC continuity as far away from this series as is humanly possible, too.

Gernot, hopefully things will get better with issue 4.