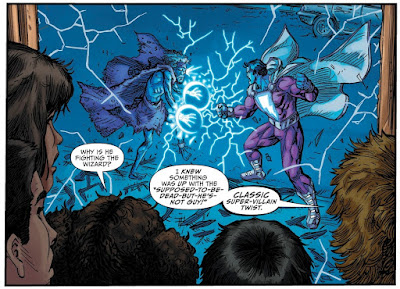 The latest issue opens with Billy giving us a recap of what has gone on via his thoughts.  Interesting here is that it appears like Billy and Captain Shazam are having separate thoughts within Billy's mind.  Billy overhears Wizard Shazam and C.C. talking and he's gets up to look to see his dad struck down by Wizard Shazam.  They argue about it which leads to Captain Shazam vs Wizard Shazam.  The onomonapia wakes up the rest of the house who watch the big fight going on in the backyard.  The rest of the Shazam Family join in to help the Captain.

Interlude with the Vasquez's helping C.C., now stripped of his power.  He tells them he senses a great evil.  Meanwhile Wizard Shazam is getting ticked at the super-powered children.  Cut to the Monsterlands where Sivana and Mr Mind release the Monster Society of Evil...except for Superboy-Prime.  Back to C.C. who tells the Vasquez's he had a vision of Wizard Shazam as someone who is much more war-like than everyone was led to believe.

Mr Mind has been using C.C. Batson as a host this whole time. The Monster Society arrives on Earth, and in the Magiclands, Superboy-Prime gets out of his cell and is coming for Billy Batson.

I have to give the devil his due, this was one of Geoff Johns' better scripts in this series.  Of course that isn't saying too much since the bar is set so low. He kept things moving and focused, and threw in quite a few plot swerves. Scott Kollins is the sole credited artist for this issue, and is par for the course- good but generic.  I really would have liked to see Mayo "Sen" Naito do the art for this issue as it really would have elevated it even more.  Even so, I'll be very generous and give this issue a B-.
Posted by Shazamaholic at 10:08 AM