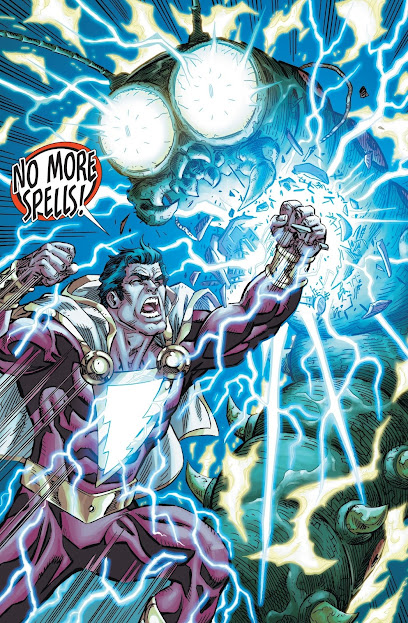 This issue starts with a needless recap of Curse of Shazam, which then goes into recap of the current story so far.  Can you say "filler"?  We get to the present, the big fight continued from last issue.  Superboy Prime shows up. Then we cut to Daddy Shazam's head, where Captain Shazam and Mr. Mind are battling it out. Inter-cut between this and the Shazam Family fighting the Monster Society, with lots and lots of dialogue in between punches. Then it finally dawns on Capt Shazam that Mr Mind is a worm who needs an amplifier to talk.  He crushes the speaker and Mr Mind's ability to cast spells is wiped away.  Normal size again, he is about to cast a spell to stop the worlds from merging and to send the Monster Society back to where they came from, when Superboy Prime attacks (and refers to Mary and Junior by their rightful Marvel names).  Suddenly Black Adam shows up to team up with Capt Shazam to vanquish Prime. Billy shares his power with Black Adam to prevent him from dying after they use their combined lightning bolts to knock Prime out. Captain Shazam casts the spell, and everything returns to normal.  CC Batson, now free from Mr Mind's control, awakes, but has no memory of anything that has happened, leaving Billy somewhat heart broken. There is a kind of sit-com style happy ending where most remaining loose ends are tied up with some narration and Black Adam becomes the missing seventh champion.  Well, thankfully, this story is finally over... at least until the gets regurgitated as a musical by the sequel Shazam Fury of the Gods... if that movie does get made (I say it's a 50-50 chance it will get cancelled due to COVID-19).  As for this issue, it earns a lackluster C-.
Posted by Shazamaholic at 11:04 AM