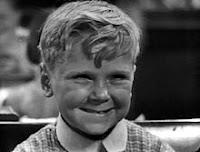 He was a member of Our Gang in the early sound era, starring in what is known as the "Miss Crabtree trilogy", perhaps the best sound films Our Gang ever made.  He was the youngest actor ever nominated for an Oscar, for the film Skippy (directed by his uncle, Norman Taurog, who also directed several Elvis Presley movies).

Later he co-starred with the Dead End Kids' spin-off group, The Little Tough Guys.  He continued to act, and by the 1960s, he started working behind the scenes.

He ran Columbia's "Screen Gems" TV division, and was responsible for green lighting The Monkees.  By the 1970s, he became an Emmy winning director for the TV series M*A*S*H*.

In the late 1970s he returned to acting to be, in my opinion, the unquestioned definitive Perry White in the Superman movies.

Eternal rest grant unto him, O Lord, let perpetual light shine upon him, may he rest in peace.
Posted by Shazamaholic at 7:50 PM