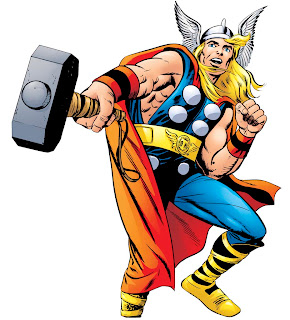 When it comes to superheroes, I am pretty much a DC guy (although, ironically, I have no interest in seeing the upcoming Green Lantern movie).  But there are a few Marvel Comics superheroes I enjoy, at least in small doses. One of them is The Mighty Thor.  As a kid, I watched reruns of the old Grantray-Lawrence Thor cartoons.  I liked the early adventures, that seemed to be a take off of the original Fawcett Captain Marvel. In those stories, crippled doctor Donald Blake would tap his enchanted cane on the ground, which would transform him in a blinding explosion into the super powered Thor, while his cane transformed into an enchanted hammer that could be used as the ultimate weapon, and could control the weather.  Thor would battle some of the most powerful villains on earth.  Romantic drama was provided by Blake's nurse, Jane Foster.

However, a couple years into the series, the exploits on earth began to take a backseat, as Thor began to spend more time in Asgard, and his adventures took more of a galactic nature.  It was also revealed Don Blake didn't turn into Thor, but rather Thor's father Odin created the Don Blake persona as a way to teach Thor humility.  Needless to say, it all became very convoluted as the creators moved away from the Captain Marvel inspired roots, and moved more into Norse mythology and cosmic story lines.

As a fan of the earlier version of Thor, I went to see the new movie.  For those wanting those early comic book stories transferred to a live action epic, that's not really what we got.  The whole concept of blending Norse mythology with a mortal-to-superhuman Captain Marvel aspect has been dropped (which ultimately could be very good news for the Shazam movie, since there now no way critics and naysayers could deem Captain Marvel a copy of Thor).  In it's place, director Kenneth Branagh seems to have merged Norse mythology to a Superman archetype.  Asgard, in this movie, echos Krypton (and could be a problem for the upcoming Superman reboot if it looks too similar to Asgard).  Instead of the classic Thor costume, we get an outfit that merges Asgard trappings with a heavy metal/biker sensibility.

The film starts in New Mexico with Jane Foster (who is not a nurse as in the comic, but a physicist who has been injected with a fair amount of Lois Lane's personality) and her crew (Kat Dennings as the Jimmy Olson type character and Stellan Skarsgard as the Perry White type character - neither of whom are from the comics) discovering Thor who has just been banished from Asgard.  From there we cut back to see how Thor got banished, due to his arrogance and recklessness. There is a great action sequence with Thor fighting Frost Giants, and we get to see images right out of the comic of Thor using his hammer.  Indeed the two biggest gimmicks of the character (besides the mortal-to-superhero transformation) are the hammer and the helmet.  Unfortunately, though, Thor only wears the helmet in one brief scene.  In fact, once he is banished to earth, we don't see him in costume again at all until the very end of the movie.

Once on earth, we get  humorous fish-out-of-water scenarios, with even a Dr Donald Blake reference for the hard core fan.  It even seems to go into Batman TV show mode with an interesting use of tilted camera angles (tilted camera angles always make a film look more interesting and fresh, even when its not). At this point, the film becomes more about relationships, as we see one develop between Thor and Jane, and see interspersed scenes back on Asgard of Loki who is revealed to be a Frost Giant whom Odin saved/abducted as a baby, and how Loki manipulates himself to become king when Odin falls into the Odinsleep.

Of course, there are the mandatory references and cameos setting up The Avengers, as Thor attempts to reclaim his power and hammer, which he fails to do because he is no longer worthy. When the Warriors Three and Sif travel to earth to bring Thor back, Loki send the Destroyer to... well, destroy earth.  There is the other main action sequence, where the Destroyer mortally wounds Thor, but now he is worthy, having become a better person since being banished to earth, and the hammer flies to Thor, and restores him back to full power, and gets him back into his costume (minus the helmet, of course).  After taking care of the Destroyer, the Asgardians go back to Asgard to stop Loki.  The Rainbow Bridge is destroyed, and it looks like Thor will never be able to come back to earth or to see Jane Foster again.

Overall, the movie was fairly enjoyable.  The actors all did very well in their roles.  Chris Hemsworth, who played Thor and looks a lot like pro-wrestler Chris Jericho, had very good charisma as Thor, and at times, his personality seemed very similar to Eric Allen Kramer's portrayal of Thor on a 2 hour episode of the old Bill Bixby Incredible Hulk TV series.  In fact, Kramer (who now currently stars on the Disney Channel sit-com Good Luck Charlie - Disney owns Marvel Comics) was slated to have a cameo in Thor, but I did not see him in the film.  Anthony Hopkins, who played Odin, did the role comparable to Marlon Brando's Jor-El. Tom Hiddelson's Loki was very good.  At different times in the movie, you weren't quite sure if you should feel sorry for him, cheer him on, or boo him. Branagh was successfully able to mix the humor driven earth scenes with the grand and picturesque Asgard scenes.  Thor's flying scenes were good, but not overdone.  But some of the shots of the final fight scene between Thor and Loki had an almost Joel Schumacker Batman & Robin look to it where the actors look like they are being pulled by wires.

And I think it would have been nice if they could have worked the old Thor theme song from the cartoons in there some where, as well as maybe a few bars of Wagner's Ride Of The Valkyries.  Thor was a good and entertaining movie, but I feel it could have been better.
Posted by Shazamaholic at 4:07 PM