Captain America: The First Avenger is perhaps the best "superhero" movie since Spider-Man 2 (with the possible exception of The Dark Knight).  I put "superhero" in quotation marks, because Captain America doesn't really seem like a typical superhero movie.  It's much more of a retro, romanticized World War II movie with some sci-fi elements. 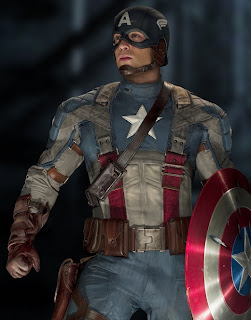 The movie opens in the present with SHIELD agents finding something big in the Artic, but the story begins in the 1940s with Steve Rogers failing time and time again to enlist in the army because of his frail health.  With his best friend Bucky (a nice revision of the comic book sidekick, and the very first time this character has made it to live action) about to ship out overseas, Steve makes a last ditch effort to enlist at a recruiting station set up at a fair (with a quick wink to the original Human Torch, coincidentally the revamped Fantastic Four version played by none other than Chris Evans).  There Rogers meets up with Dr Erskine who offers him an opportunity to serve his country.  Rogers becomes one of several candidates for a super-soldier program.  As the candidates go through basic training, we get to see why Erskine ultimately picks Rogers over the others, even though physically, he continues to come in last.  We find out Erskine was forced by the Nazis to conduct an early prototype of the experiment on Johann Schmidt, which resulted in him becoming the Red Skull (and looking freakishly like a bald, red skinned Michael Jackson), leader of Hydra, Hitler's supernatural division (with allusions to Asgard and Thor). With an assist of Howard Stark (the future Iron Man Tony Stark's father) and some retro scientific machinery, Rogers becomes the first super soldier, while a bullet from a spy who infiltrated the experiment kills Erskine making Rogers also the last.
Since there is no team of super soldiers, Rogers is sent to the USO to be a patriotic morale booster as the costumed Captain America.  When he learns Bucky has been captured, he sets off on his own to rescue him and the "Howling Commandos" transplanted from the WWII comic book adventures of Nick Fury.  Now Captain America, Bucky, and the Howling Commandos go on to bust Hydra, who has split off from the Nazis to take over the world for themselves (there is also a quick nod to the Captain America TV movies starring Reb Brown - in one scene Captain America is on a motorcycle and puts his shield where the windshield would be-- the TV Captain America's shield was clear plastic and doubled as his motorcycle's windshield).  On one of the missions, Bucky is killed, and Steve blames himself.  But he carries on with the Howling Commandos to stop the Red Skull from his ultimate plan.  In order to save New York, Captain America sacrifices his life to crash the Red Skull's bomber in the Artic.  Steve's final moments before the plane crashes as he speaks to the girl he loves, Peggy Carter, on the radio for the last time are moving.  But suddenly it is the present, and Steve wakes up, having been in suspended animation, as he encounters modern New York and Nick Fury, setting up The Avengers.
Joe Johnston directed the movie very well, giving it a retro Americana feel.  Chris Evans was perfect as Steve Rogers/Captain America. Johnston's use of special effects to make Evans into the skinny Steve Rogers was flawless, and makes one wonder if this could be the future of a movie like Shazam!, where a single actor via the aid of special effects, can play both the 12 year old Billy Batson and the super powered adult Captain Marvel. Tommy Lee Jones was excellent as Col. Phillips, and Sebastian Stan perfect as Bucky. Haley Arwell was fine as Peggy Carter, and Hugo Weaving did a good job as the Red Skull.  Stanley Tucci was excellent as Dr Erskine, and Dominic Cooper's Howard Stark is much closer to the classic comic book Tony Stark than Robert Downey Jr.'s portrayal. 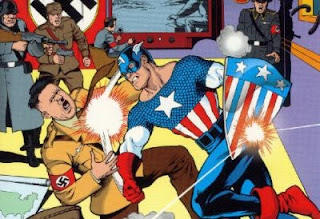 One of the only nit-picks I had about this film were Captain America's costumes.  His first costume is a USO costume based faithfully on the comics, and made in a primitive 1940s wool style reminiscent of the loose fitting superhero costumes of old movie serials (this definitely wasn't the skin tight spandex Reb Brown wore, or the cheap looking rubber suit Matt Salinger wore).  But I would have liked to see the USO costume really be faithful to the original comics by having Captain America's shirt be made out of blue chain mail. The original chain mail costume has never made it to live action, and I wish the costume designer would have gone for it instead of the retro movie serial look.
The costume for the majority of the movie worked great. A hybrid of a military combat uniform and a typical superhero costume.  My only gripe about it was they put this wide gray border on the seams of the shirt, which was unnecessary.

It speaks well of the movie if my only complaints are with some of the costume choices. It also would have been nice if we could have had a couple movies set during World War II, but the scheduling of The Avengers prevents it.  DC and Warner Brothers need to take notice. The retro look, and good character development, combined with well done action along with some fun and humor is a good template for the languishing Shazam! project far more so than the "Big in tights" concept they seem to be bent on.  A director like Joe Johnston would have been perfect for Shazam!, just as Joss Whedon, the director of next summer's The Avengers would have been perfect for Wonder Woman.  But alas, as the failure of Green Lantern shows, it seems like DC can't seem to do anything right in recent years, as Marvel Comics continues to pass them by.
Posted by Shazamaholic at 5:47 PM

After looking back on the movie, my only complaint is that none of the German characters speak German when they should be, like when they're alone together, especially when the Nazi brass comes to inspect Hydra. That kind of killed a small part of the enjoyment of the film for me, but overall, I think it was the absolute best of the lot thus far. My favorite thing about the film was how the love story peacefully co-existed with the rest of the story, not trying to backseat it, developing naturally and not being thrown in our faces. Nothing ruins an action movie more than an overbearing romance.