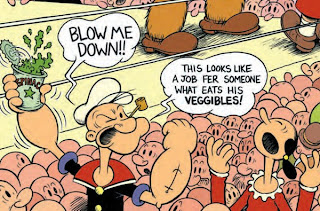 The third issue of POPEYE has the strongest script of the three issues so far. Roger Langridge gets more humor in it, and tells a good story that combines aspects of Segar and Sagendorf.  Geezel tricks Wimpy into a fight where his opponent is...  well, I won't spoil it.   Popeye trains Wimpy for the fight.  Popeye ends up taking Wimpy's place in the match, and afterward, Wimpy develops a whole new relationship with his former opponent.  Ahem.

The artwork for this issue is by Tom Neely.  Unlike last issue's Ken Wheaton, Neely does not draw in Bruce Ozella's style.  Instead Neely draws in a style reminiscent of Barbecue For Two, the pilot cartoon for the 1960 series of TV cartoons.  Neely's art is a little more polished than Ozella's, but there are panels where his art gets sloppy, as if he was getting fatigued at the end of a long day of drawing. I like that Neely, who also colored the issue, gets Popeye's hair red (a detail mostly forgotten after decades of the bald animated Popeye), but he has one major mistake:  he gave Popeye teeth.  In the Segar strips, and the pre-1940 Fleischer cartoons, Popeye has no teeth, only gums.

Overall, issue 3 is the best of the series so far, an A-.
Posted by Shazamaholic at 5:30 PM