Popeye #5 sees the return of Bruce Ozella as artist.  His work in this issue is better and more polished than his turn in issue #1.  This issue spotlights Swee' Pea in a pair of stories.  The first one deals with Swee' Pea running away from home because Popeye scolds him for misspelling "cat".  Most of the humor in this story focuses on Popeye misspelling words, thinking he is correct and everyone else is wrong.  Swee' Pea hooks up with a gang of kids and punches out several dogs.  Kind of a weak script by Roger Langridge.  The second story has Popeye and friends making home made comic strips to entertain Swee' Pea. Its slightly better than the lead story, but feels like a filler.  This issue's variant cover is the great John Byrne cover originally planned for issue 4, but it would have been a better match for the next issue.  Issue #5 gets a C. 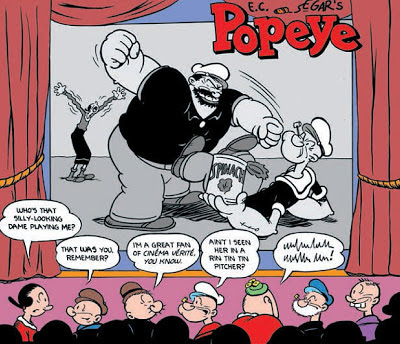 Popeye #6 features the return of Ken Wheaton as artist. Like Ozella, his art this time around is better and more polished than his first try in issue 2.  The story, by Langridge, is one of his better efforts.  Capturing the type of parody and satire that E.C. Segar excelled at, the plot deals with movie director Flash Meischer (a caricature of Max Fleischer) signing Popeye to a movie deal. Hot Hollywood types are cast in the leads, only to have Meischer suffer a breakdown.  Wimpy takes over as director, and decides to use the real people instead of actors, but then its revealed Bluto is the movie's main investor. There is a good homage to Popeye Meets Ali Baba's Forty Thieves, and a parody of product placement in movies crowds out Popeye's spinach.  The movie is saved when Wimpy inserts "reality" fight footage of Popeye into the final edit. Wheaton's art depicting the black and white film footage is stellar, and has a sense of fluidness in contrast with the stiffer panel compositions of the IDW house style for Popeye.  All in all, issue 6 ranks up there with the best issues of the IDW run, and earns an A.
Posted by Shazamaholic at 1:20 PM