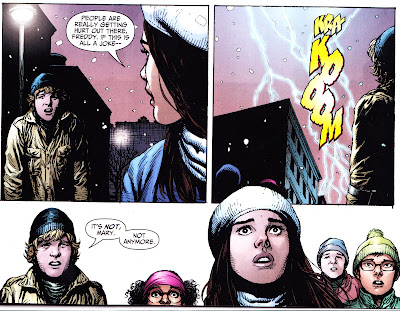 Chapter 10 of Curse Of Shazam in JUSTICE LEAGUE #18, opens on Bryer, accompanied by police, confronting the Vasquezes about Billy's whereabouts and his totaled car.  Mary and the other kids are listening in, and Mary asks Freddy where Billy is.  As the confrontation between Bryer and Vasquez heats up, all are startled to see something in the sky.  A bus falls from the sky, crashing to earth in a fiery explosion.  Cut back to the city, as Black Adam is running amuck.  Back to the Vasquezes home, as Freddy watches a news bulletin of the incident.  Just as Black Adam makes a threat to kill Captain Mar... er, Shazam, the city loses all power.  Freddy then confesses to Mary and the other kids Billy is Cap...er, Shazam.  They sneak out to find Billy, who is at the zoo talking to a tiger he calls Tawny.  They confront him (and yes, Darla is still quite annoying), but Billy refuses to turn back into Cap... er, Shazam.  Billy leads the kids to the subway in hopes of getting to the Rock of Eternity so the power can be given to someone else.  Cut back to the city, where Sivana and the seven sins meet up with Black Adam, who plan to end the world.

This is a decent chapter.  Gary Frank's art, as usual, is great.  The script is better this time, as we get to see more character drama and conflict. Billy questions himself and considers if it would be best for the power to go to someone more competent.  The only negative aspect is the presence of Darla, Pedro and Eugene.  It's kind of pointless for them to be there as they muddle the picture.  As they all descend the stairs to the subway station, I get the bad feeling we may either get the "Captain Planet" aspect of Flashpoint's "Captain Thunder" character, or we will get instant Shazam Family, with Freddy as Kid Shazam, Mary as Shazam Girl, and the other three as Lt. Shazams.  This chapter earns a B.
Posted by Shazamaholic at 12:25 PM