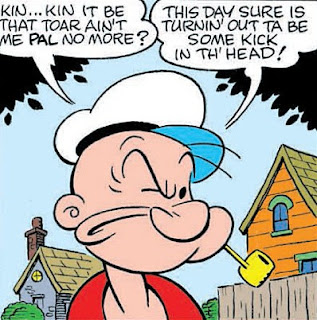 Two more issues of POPEYE to review this time.  First, issue number 10.  This issues features a boxing drama.  Toar is going to be deported, but in order to stay in the USA, he has to provide a skill no other American can provide.  Toar says he can beat Popeye in a fight.  So a boxing match is set up with Toar's citizenship on the line.  The script is typical Roger Langridge: heavy on action, light on humor, and an overabundance of dialogue.  The art is by Vince Musacchia, who turns in excellent work.  Faithful to Segar, and very fluid.  The issue also includes an entertaining Sappo/Watasnozzle back up feature by Langridge and Ken Wheaton.  Issue 10 earns a B-.

Issue number 11 features the return of Bluto, who comes to town as a magician with a vaudeville troupe.  He threatens to steal Olive Oyl, and in fact makes her disappear during his act.  Popeye rescues her as Wimpy and his ventriloquist dummy scares Bluto out of town. A top notch script by Langridge that turns up the humor.  In fact there are a couple laugh out loud moments, I think a first for the IDW series.  Musacchia returns to do the art, and its even better than the previous issue.  Issue 11 earns a strong A.
Posted by Shazamaholic at 12:47 PM