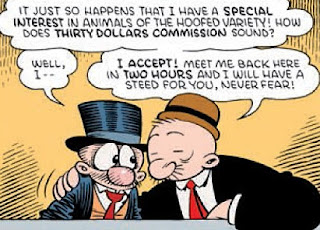 POPEYE #12 features the very first crossover between Popeye and Barney Google.  The story begins with Google, Toar, and Castor Oyl playing cards.  Castor wins Google's race horse and enlists Popeye to be the trainer.  Google gets Wimpy to find him another horse to race, but Wimpy ends up bringing him a cow.  At the big race, the hooded figure who sold Wimpy the cow, dumps marbles on the track, causing the cow and horse to slip and stumble, with Popeye and Google being tossed onto the other's steed.  Popeye, now on the cow and losing to Google, decides to jump off the cow, lift it up and run to the finish line.  However the judges disqualify Popeye, and announce Google the winner, when the hooded figure is revealed to be Google's ex-wife.  The second story is a sentimental filler of Popeye writing a letter to Swee'pea's real mother explaining how, when he took Swee'pea to a fair, Swee'pea wandered into a fight tent, and with some help from Popeye, beat Bersurka Mazurker to win the cash prize.

Written and drawn by Roger Langridge, the lead story casts Popeye is a supporting role, with Barney Google the focus of the story, playing opposite Wimpy and Castor.  Once again, Langridge is very light on humor and heavy on dialogue.  His art seems to favor Barney Google, while the Thimble Theatre characters are more crude.  The back up story could have been 3 or 4 pages, but is padded to 7. Overall, issue 12 earns a C.﻿
Posted by Shazamaholic at 12:22 PM