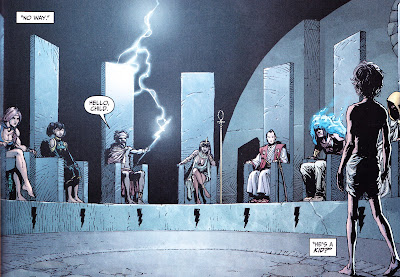 Chapter 11 of Curse Of Shazam in JUSTICE LEAGUE #19 opens with the six kids getting on the subway, which is deserted due to the city being evacuated.  The power goes out on the subway car as Billy tries to will it to take them to the Rock of Eternity.  Then the mysterious Francesca, from a few chapters back, appears to Billy through Eugene's ipad.  She tells Billy how he can get to the Rock: he can open a portal to it anywhere as long as he is underground and enchanted.  She then tells Billy the story of Black Adam.  She tells him they are linked to each other like family.  Oddly, Mary was able to hear the word "family", even though Billy is the only one who can see and hear Francesca.  As she recaps the origin of Black Adam, we learn his real name is Aman, and he was a boy, in ancient times in the country of Kandaq, when his parents were killed and he was dragged off by Ibac and his army to be a slave.  The boy is eventually found by his uncle, and they attempt an escape from Ibac, but the uncle is wounded, and a bolt of lightning then transports the boy Aman to the Rock of Eternity, where a council of seven wizards (including the last surviving wizard who gave Billy the power) await him.  Billy cuts Francesca off, realizing Black Adam is really a boy like him.  He runs off to talk to Black Adam, confident he now understands where Black Adam's coming from and he can reason with him.  Billy approaches Black Adam, telling him he is the new champion and he understands why Black Adam is lashing out at others, that he's only trying to hide how scared he really is.  Predictably, Black Adam grabs Billy by the mouth, and tells the stupid kid he doesn't know anything.  Looks like curtains for Billy.

This chapter seemed like a filler, its only purpose to recap the origin of Black Adam.  But there are significant changes. No more Teth-Adam, the inclusion of Ibac, and a council of wizards.  On a side note, the lead Justice League story deals with Superman and Wonder Woman invading Kandaq to free some hostages.  Johns uses this to give a brief history of the fictional country, and introduces a terrorist group named Sons of Adam.  Once Curse Of Shazam wraps up after two more chapters, Capt... er, Shazam, is expected to join the Justice League, so this is setting up the next story arc. Chapter 11 earns a C.
Posted by Shazamaholic at 6:57 PM

Darla again wins most annoying character when she exclaims, "is something supposed to happen?". No, Darla, this is a Geoff Johns script. Nothing ever happens. Ever.

I don't know if Johns is writing this as a slapstick comedy, but thats how it plays out when Billy gets all geeked up when he finds out Black Adam is a kid, and Billy runs out to give Black Adam some bromance, only to have Black Adam grab the little retard by the head and lift him up. Pure Keystone.

And what's with the council of wizards? Are they the ethnic Super Friends? It looks like Rima, Black Vulcan, Isis, Samurai, Apache Chief and El Dorado.